Top of The South News with Jenny Pomeroy

Richmond hosted the Ernest Rutherford 8B tournament over three Thursday afternoons, 29th August, 5 and 12th September.  Spreading the sessions over three weeks like this works well for those who are less keen to play a whole day or who aren’t free on Saturdays.  Thanks to Richmond members, Ron and Shirley Burt, who catered or the three afternoon teas and to Ernest Rutherford for their sponsorship and platters for the final afternoon.  Unfortunately your photographer isn’t free on Thursday afternoons, so no pictures, but the winners were:

2nd       Vicki and Bevan Russell (watch out Westport, as this father daughter duo are heading your way)

Picton hosted its ever-popular Intermediate tournament on 21st September.  Three grades ranging from the more experienced Intermediates to Juniors new to the tournament scene.  Nice touch, session winners who didn’t otherwise feature in the prizes won a bottle of wine.  Also a prize for the best novice pair.  And well done those winners in Diamonds!  Well up the field.

3rd were Kathy Dowling and John Clarke. Claire is the Picton club president and is seen in the rest of these photos presenting the prizes.

A Weekend of Bridge in Golden Bay

And most recently, Golden Bay hosted a weekend of bridge with Richard Solomon delivering a lesson on Friday night to a crowd of twenty.  The Golden Bay 3A Open took place on Saturday and the Howorth Cup, Top of the South’s premium interclub competition on the Sunday.  Hospitality, excellent as ever.  And great to see past Golden Bay players back in the Bay, particularly Jane Kara whose visit from Australia timed nicely. 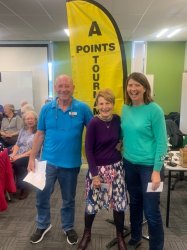 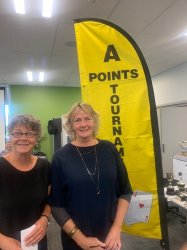 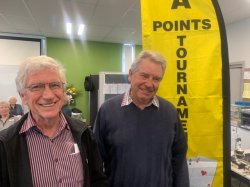 Craig did an excellent job directing and scoring the two days of bridge in Golden Bay and brought along the very decorative yellow banner which gave the 3A event a very good profile. 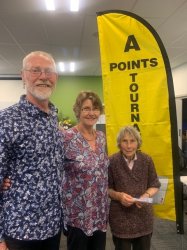 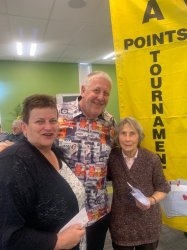 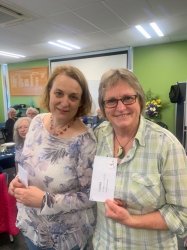 Nelson had a convincing win on Sunday’s Howorth Cup with Richmond 2nd, Marlborough 3rd and Westport 4th. Nelson retained the trophy they won in 2018.

Greymouth held a one session social tournament for the three West Coast clubs: Greymouth; Hokitika and Westport.  15 tables had a great afternoon, with the Westport contingent making their way down the coast by bus.

A big cohort of Top of the South players had a good week at the National Congress.

Motueka and Golden Bay battled it out on 14th September in the second round of the Margaret Cederman Interclub.  A convincing win by Motueka ensured that the trophy does another stint residing on the eastern side of the Takaka Hill.  Well done Mot.

Several clubs have held their AGMs recently.  Simon Langford continues as president of Golden Bay with Eleanor Bradshaw vp; Susan Hinkley carries on as Nelson’s president with Ruth Allison stepping up to support her as vice president and with the Russell family’s imminent move to Westport, Steve Gray was elected president of Richmond Club.  We wish Vicki, Bevan and Marlene all the best with their move and perhaps getting to grips with a different system.

Westport has a youth section playing on Tuesday afternoons.  Nelson hasn’t quite enough for a youth section but have an 11, 13 and 17 year old who have just come through the lessons and are making their mark on a Monday night, all with at least one session win to their names.  Eight learners in Picton have just begun club play and Westport’s tournament in mid November is already sold out!  We all love that West Coast hospitality!

And a big plus for Top of the South hospitality if my experience at Golden Bay is anything to go by. All players seemed to enjoy their bridge which was played in the best of spirit throughout….and a heap of pairs/players went home with either a grade or a raffle prize…and all having eaten from the excellent locally prepared food which included more cockles than I had seen for many a year.