Sunday Millar, a testiment to the longievity of bridge players.

I have commented in these pages before how we sometimes have to unlearn the lessons that we have laboriously absorbed over the years. When we start out, we often tend to grab tricks wherever we can and hope something miraculous happens to provide any extra that we might need. Some way down the track we learn to bide our time a little; this is particularly true as Declarer in No Trump contracts, where we must often defer taking a winner to cut communications between defenders. But sometimes we need to revert to our earlier instincts. Take a look at this little gem from the National Congress Swiss Pairs.

West is likely to end up as declarer in 3NT, and North will lead a club. Thinking of ducking the ace? Then think again. South will win with the queen and return the suit, and declarer cannot prevent North from regaining the lead at some stage. If, however, you win the ace, then the suit is irretrievably blocked, and you will end up with not just 9 but 10 tricks. Not many found this blocking play of the ace, not surprisingly.

Auckland’s Thursday Teams, generously sponsored by Logan Campbell, provided a last-minute workout and triumph for three of our China-bound internationals in Barry and Glenis Palmer, and Linda Cartner. Paula Boughey ably substituted for Barry’s regular partner Neil Stuckey, who decided he needed more than the available 5 minutes between the end of the competition and leaving for the airport. 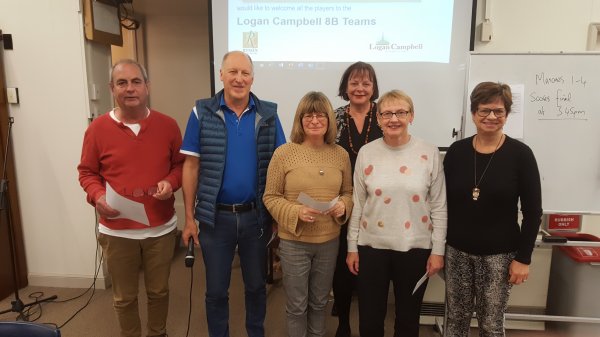 This explosive hand from the final match of this event produced no fewer than 10 different results across the 16 times that it was played. At favourable vulnerability, West should have no hesitation opening a pre-emptive 3

. North, holding pretty decent hearts herself, will pass smoothly. East should not pass this; after all, a heart contract is going be played in a 7-0 fit, with no guarantee of avoiding losers in the trump suit, whereas a spade contract is likely to lose no spade tricks, and could provide a 7-0, 7-1, 7-2, or even 7-3 fit on a good day, as is the case here.

from East, which West is very happy to raise to 4

- given the chance. As it happens, EW can make 6

, although that takes an excellent view in both red suits to succeed. 10 pairs did in fact play in spade contracts, 8 of them in game.

But what about North-South? They have only one loser in the majors, an excellent fit in clubs, and a good side suit to come home in – apart from an unlucky heart ruff, 5

makes by South and is always cold by North. South can therefore compete with a 4NT bid – “please pick your better minor, partner”. Since the theoretical datum score by EW is +980, in a perfect bridge world (where is that?) NS would have to take the vulnerable sacrifice in 7

Middle of September and the A point circus moved down to Howick, where regular winners Patrick Carter and Julie Atkinson once again graced (?!) the podium in the Open section, while the less familiar partnership of Lenice Clarkson and Angela Signal took the Intermediate. Many thanks to Bruce McLaren Retirement Village for their generous support.

WINNERS at HOWICK  and Reward for many at Franklin

And moving even further south to the outer limits of my domain to Pukekohe, Estelle Arts and Geoffrey Sedon won the Intermediate tournament there, while John Wang and Gary Chen were winners yet again in the Open. Always a pleasure to play at the Franklin club, since their generous raffle prizes, this year very substantial boxes of veggies, make up for those who did less well at the table.

Hoist by his own (feline) petard!

As always at this time of year, the local tournament scene was temporarily put on hold while we all trooped down to Hamilton for a week for the annual New Zealand Congress. As you might guess, Biritch the Russian Blue is very arrogant about club bridge, dismissing the more social side of our game as far beneath his lofty standards. But the Congress gives ordinary mortals the chance to cross swords with the mighty, and sometimes even bring them low. Here two lady club players took this opportunity with both hands to deal to the feline curmudgeon.

In the first of these two successive hands from the Swiss Pairs event, our heroine in the North seat opened 1

, eliciting 1NT from South, followed by 2

from North. At this unwelcome development, South panicked and passed. Turns out this was exactly the right thing to do, with 3

cold from the North seat. However, this was not good enough for Biritch, who was seated West. He promptly swished his tail furiously and laid into his long-suffering partner: “You must always lead a trump when dummy gives what is obviously very reluctant preference to one of declarer’s suits”, he growled.

Moving onto the next deal, the board was rotated, and so Biritch opened the East hand 1

, again drawing 1NT from partner. As he usually does, Biritch upgraded his hand by adding a trick for his declarer play, and offered 3

as his second bid, at which his partner visibly winced and gave preference with 3

. Unfortunately for Biritch, our other heroine in the South seat had absorbed his unsolicited advice from the previous hand all too well, and promptly led - a trump! Down 1.

Back to home base, and the Mt Albert Restricted Pairs saw Pat Williams and Gillian Goodall walk away with the spoils. Auckland’s monthly Thursday daytime events are now becoming a popular diversion for our "Grand Masters of Leisure", and October’s Pairs proved no exception, with Malcolm Mayer and Ian Berrington walking away with the 8 B points. And staying in Auckland, Malcolm was back in action just two days later, this time with Rachelle Pelkman, to win the annual Wes Dodd trophy. On the same day, the North Shore held their very popular combined Intermediate and Junior tournament; in the former, Leah Andrews and Anna Powell scored a narrow victory, whereas in the Junior, Rob Davies and Aaron Starr won both sessions to run out easy winners.

The first three days of November saw a triple header around the region. First, on Friday 1st, the ever-popular New Zealand Wide Pairs drew in a record participation of over 1000 pairs, with a large number of those from our region. Winning the A points were Grant Jarvis and Lynne Geursen from the Franklin club placing 3rd in the region, just behind Hamish Brown and Johanna Perfect at Mt Albert. Topping the field in our area, and coming second nationally, were Bill and Sulochna Humphrey at Kerikeri; however, even they were considerably outpaced by overall winners Trish Stephens and Ruth Lewis from Rotorua, who clocked a magnificent 75.67%. Thanks again to Richard Solomon for his hard work on this event.

Next day, several mainlanders took the ferry ride over to Waiheke Island for their annual Restricted 8B event, with the fare proving worthwhile for winners Birgit Cameron and Dong Gao Bi. And on the Sunday, Orewa was the setting for their combined 3A Open and 5B Restricted, with Gary Chen and Clair Miao taking the former and Daphne Turton and Nina Medland the latter.

Finally, we sadly bid farewell to Auckland’s Sunday Millar, a remarkable testament to the sustaining powers of bridge. Sunday was 103, and she played her last game at the club just two days before she passed away, scoring 59.90%. She was New Zealand’s oldest active JP, and she featured in Renee Hollis’ book and documentary Keepers of History, a collection of memoirs of centenarians.


Sunday Millar, who always drove herself to the
Auckland Bridge Club.

Footnote. Competitive bridge players are always on the lookout for advances in the game to give them an edge over their opponents in either the bidding, play or defence. I have been discussing a few possible developments with the redoubtable John O’Connor, and here are two of his suggestions for your consideration.

The first is unlikely to meet with approval of the somewhat strait-laced authorities of the game (and maybe not the editor/moderator of these pages); this is a novel method of pulling Trump which we have termed the "Stormy Daniels" coup. Likely to be more popular in New Zealand is a method of signalling that you are in a position to make a king or queen, to be known as "Winston Peters"  (far more noteworthy than the somewhat bland "Smith Peter").