Recently a couple of people have asked whether I was still writing reports for New Zealand Bridge and the Canterbury region. Well in 2020, Covid threw the reports schedule into disarray as many tournaments were cancelled. Even Nationals at Hamilton/ Karapiro was cancelled very late in the piece. To offset this many North Island clubs decided to run an extra tournament during Congress week to cater for the many players who had taken annual leave to play bridge. Unfortunately, no club in Canterbury offered their services to fill this gap, and as a result of this I believe, Canterbury was left out of the schedule.

There were quite a few tournaments in September and October on which I have not reported. Therefore, in representing the Regional Committee, I should report on the tournament the Regional committee organised. This 10A was held at the Christchurch

Two players arguably scored their best “winning” success from their tournament history. Pam Tibble and Brian Goulter were the most consistent pair to finish first in a strong field, attracted from all corners of the South Island.

Round 2 John Kruiniger and Fiona Temple scored the top percentage for the day 67%, David Taylor/Jane Lennon 62% and Pam Tibble/Brian Goulter 59.4% 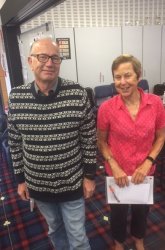 The only National title awarded in 2020 was for the Congress Rubber Bridge. Congress had been cancelled, but before this happened regional competitions had been run, and NZB decided to play the final event on Bridge Based on Line BBO.

In the Christchurch Club excitement mounted as our provincial champions continued their merry way through the field. Luck was with them as in two rounds, the winner was decided on the outcome of the last board though the winning margin in the final was much more comfortable.

With apologies to Stuart Grant, this photo was taken at February’s South Island Teams where Richard Solomon presented the cup to Tony. 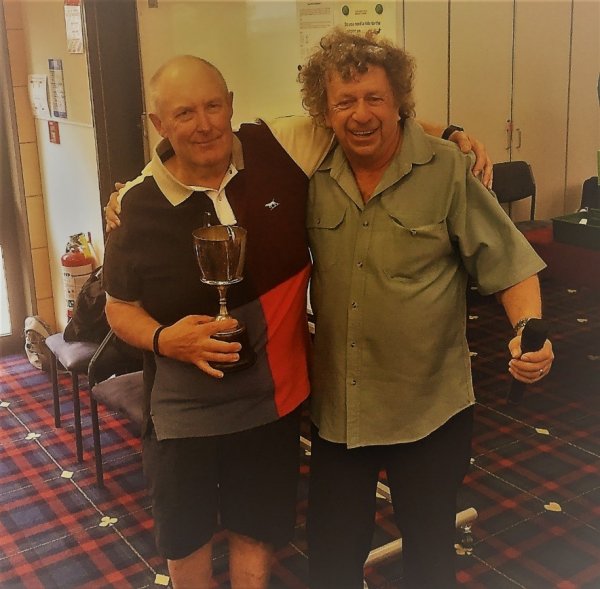 Once again, the club was surprised by the large entry in this competition in the first week of January. There were a large number of new and casual partnerships in the field. The top places were secured by very experienced players, but anyone in the top 20 places would notice that accomplished players languished further down the field.

Over the 3 rounds, the top percentages were scored by Graeme Tufnell/Mehboob Chiba 76% and Kees de Vocht/Ian Southen 72%. Other players who scored an A point as sessional winners were Sharon Jackson/Eamon Jackson; Jane Skipper/John Skipper; Sharyn Silcock/Ian Beattie.

Sharyn Silcock and Ian Beattie secured first prize in this section, having secured 8th place just below those players mentioned above – a commendable performance in a strong field.

This recently completed event has already been well reported. It was a fabulous event, extremely well organised and catered. Congratulations to the overall winners from Auckland/Wellington, Matt Brown- Michael Ware and Peter Newell – Martin Reid and also to the following Cantabrians who performed very well: