Well, actually, you do not need him as you can do all the detective work yourself. So, do you have your magnifying glass ready? Be prepared to sift through all the evidence.

It is Jan’s Day and in preparation you have to decide how to make 10 tricks on the above deal. West leads

K and you elect to duck that. Well, you are looking at maybe two diamond, two club and maybe a trump loser. You are not in a position to claim, yet!

9 from East (high encourage) and ruffed by you in the South hand. Well, what now? 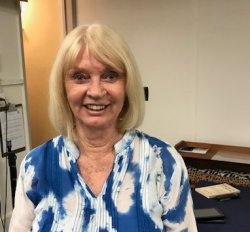 “Inference is a talent bridge players must develop to draw the correct conclusions from a call or play. The following deal from a friendly teams-of-four match abounds with inferences. In fact, it was not so much what the opponents did but more their lack of bidding that provided the delicate clues for the winning line.

On receiving the opening lead, as declarer in the South seat, you survey your dummy and weigh up your chances of success. With a possible trump loser, two diamond and two club losers, the situation looks fairly grim.

Nevertheless, we sit on the edge of our seat ready for attack as West leads the

K is allowed to hold the trick. West switches to

9 from East and ruffed in hand with

7. What do we need to bring home the contract?

The first consideration is the trump suit. Then, we know that West has

AQ. Next is the club suit. This has to be negotiated for one loser. Therefore, we require the king to be with East.

AQ and hoping they have

K, essential for the success of our contract, we must therefore assume West has

If East had the

K, that would have given East an opening bid and, of course, as dealer, East had already passed.

Having made all these educated guesses, we come to the conclusion that our only chance is that West must have the singleton

Accordingly, at trick 3, we lay down the

A and when the bare king appears, give ourselves a pat on the back for once again making a contract because we read the inferences correctly.

This was the full deal:

Contract made for the loss of one club and two diamond tricks.”

There is no evidence from Jan’s article that the declarer was John Evitt, the NZ Bridge Life Member who passed away very recently. John and Jan were very good friends at and away from the table. John was an extremely fast quick-thinking player. Yet, occasionally, he took a long long time as every good player needs to. I could imagine John analysing the above deal and coming to the above conclusion. It would be nice to dedicate this deal in John’s memory.

SUIT STOLEN …for less experienced players and others

The deal sounds like a misfit. Should we let them struggle to find a fit? Would you now take any action? If so, what?