A strong force at and away from the table.

Recent converts to the New Zealand bridge world may not be too familiar with the name of John Evitt. John passed away last weekend in Auckland after a period of ill-health. He had not been seen that much around the bridge world in the last few years but with his passing, we have lost a real contributor to our game in the last 50 years. John was 74.

He was one of the group of young Akarana members of the 1970’s, a group which has produced so many of our internationals in the late 20th/ early 21st centuries. One member of that group, Tony Thomson, described them as the “youth-quake” which hit the bridge scene at the time. John played initially at Auckland University and was one the founder members of the Akarana Bridge Club in the late 1960’s. He was also involved in the starting of the Wednesday night “Teams” Masters’ Group in the mid 1970’s. This group merged with Akarana around 16 years ago with Teams and Swiss Pairs bridge still being played regularly on Wednesday nights, under the Akarana umbrella.

John played four times for New Zealand, in the Far Eastern Bridge Championships in 1975 and Monaco Olympiad in 1976 with Malcolm Sims, with Michael Cornell in 1978 in the FEBF and in 1981 with his most regular partner Alex Moore in a test match against Australia. Among other partners were David Matthews and his very good friends, Helen and Tony Thomson.

He tasted Inter-Provincial success with Auckland in 1975 and 1977 and won the New Zealand Open Teams in 1977,1978 and 1989, the last of these when he was organising the event with Lionel Wright.

John was a confident speedy player. When John hesitated during a board, which he did only rarely, you knew that he really had a problem. He used that time very wisely counting out a hand.

He showed an interest in bridge administration at any early age, firstly at Club and Centre levels and joined the Management Committee of New Zealand Bridge (the predecessor of the current Board) in 1981 and served as its Chairman from 1984 until 1989.

John was tough, knowledgeable but very fair. He brought a strong business knowledge to the Management Committee as well as his experience as a top player. He may not “have suffered fools gladly” but he always listened. He also was an extremely clear thinker.

He was a big contributor to New Zealand Bridge Magazine especially in the 1980’s and became associated with the National Congress from 1989, only finally resigning from the Congress Organising Committee three years ago. He was utterly committed to the concept of the National Congress. I can recall “healthy debate”, indeed strong healthy debate, among the core members of that committee back in the last decade of the 20th and the first of the 21st centuries, Arie Geursen, Alan Taylor, John and myself. The outcome were most successful Congresses.

A reward for his countless years of service and for the value he brought to the game of bridge in New Zealand was his award of Life Membership of New Zealand Bridge.

Another great friend (John acquired a lot of very good friends and was extremely loyal to them) was Jan Cormack, another “sometime” partner of John at the table.

In 1991, Jan Cormack, John Evitt, Kris Wooles and John Wignall played in the Spingold Teams in Las Vegas. Seeded 176th out of several hundred teams, they reached the top 16 where they played a 64- board knock-out against a pretty notable team, Eric Rodwell- Jeff Meckstroth and Michael Rosenberg and Seymon Deutsch. John and Jan got the plumb draw, facing Meckstroth – Rodwell, seemingly each set.

One of the last deals was the following, one both Jan and John always remembered.

but the Americans were not finished and changed minor at the 6 level. However, Jan decided to bid once more as well. Rodwell doubled that with his partner taking an age to pass the double. Eventually, Meckstroth passed leaving Jan to make her combined 14 hcp doubled slam in comfort. That was a huge swing in as John Wignall was allowed to make 5

at the other table. 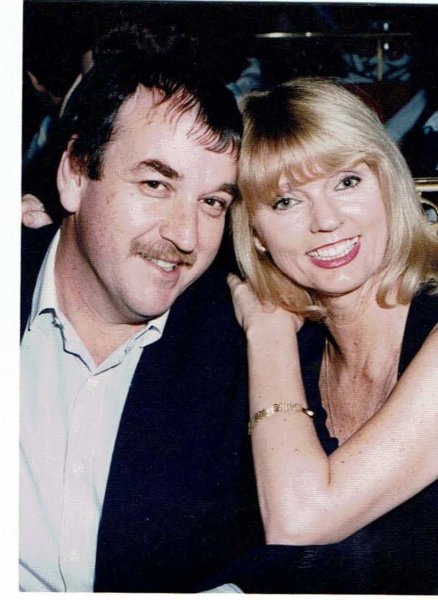 John and Jan in Vegas

The match was very closely contested with the Americans winning by 3 imps, though John Wignall claimed the margin was only 2imps. 2 or 3 does not matter. To take that team that close was a great achievement.

Among John’s great loves were good food and good wine. He cooked very well himself. He knew good and not so good food and on one occasion when a restaurant steak was not up to scratch was heard asking the waiter whether it had been cooked in the toaster! He did not mince words (or steak!) though was always fair and had time to listen. He had a lot of time for family, his brothers and extended family and was passionate about the Auckland Blues as well as an interest in cricket, golf, football and horse-racing.

His working life saw him at the family photographic business where his co-partner, one of his brothers, remarked that John seemed to spend more time on bridge than on the business. That the same brother Jeff commented that he always won arguments with John shows that the level of debate was similar to that on the Congress Committee. I am sure, indeed know that John’s sensible and sometime pragmatic arguments would often win through. At work, he travelled a lot and always placed a very high value on personal customer contact.

John was quite a private man. However, family and friends and bridge were so important to him. So was having a good time. He had a wonderful sense of humour, a sense of mischief. Look past the hardish exterior and you have a fun-loving person.

For nearly 50 years, bridge was so important to John and our bridge world benefited immensely from his wisdom, his wit, his clear thinking at and away from the bridge table. Farewell and rest in peace.

Next Wednesday’s “Jan’s Day” column will, rather aptly, feature John Evitt at the wheel in a difficult grand slam, at Easter exactly 30 years ago.