Sharleen's been on the move. See below.

Congratulations to our newest Silver Grand Master, Brian Cleaver. His most recent tournament was the Paraparaumu Open, just a few days ago on the 28th March. He started off well, topping the EW pairs in session one with partner John Luoni. Faded a little in the afternoon though, and Alan Grant and Anthony Ker came through, averaging 63.73% to win. Brian and John were second with 61.98%. 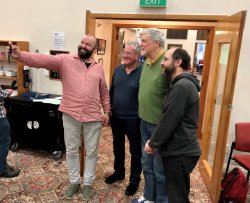 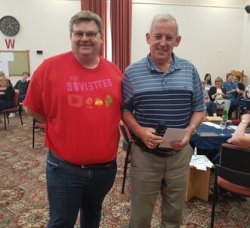 The Wellington Club hosted the 15A National Swiss Pairs in mid -March. This event went down to the wire, in terms of racing against the lifting of COVID-19 levels. It was touch and go as to whether the word “National” would be expunged from the tournament booklet. Many Auckland pairs chose to hang on with their travel plans, betting on the levels being lifted.

That gamble, and perhaps some others they made during bidding and play, came off, as the northerners took away nearly all of the prizes. On the second day, one of the locals looked around and suggested the Pipitea Room (tables 23 to 40) might be more properly renamed the “Wellington Room”, such were the number of local pairs he could see.

Still - we have the Hurricanes, and Kate Davies and John Patterson, who came in 12th. The inter-region traffic hasn’t been all one way. Kate and John, and Sandy McKirdy and Graham Stronach, have been travelling to neighbouring regions, and both pairs have had a lot of success.

Back to the National Swiss. Michael Ware and Grant Jarvis lived up to their rankings as top all-time master point earners, with a large winning margin.

The Waikanae Bridge Club always gets good turnouts for its tournaments across all the grades. 46  pairs entered its Open on the 7th February. Alan Grant and Anthony Ker won by quite some distance, scoring in the high 60s in each session. Graeme Norman and Patrick D’Arcy repeated their 2020 second placing.

The Hutt Multigrade attracted 36 pairs, with locals Vil Gravis and Lynne Bruce coming first, and also being the top Open Intermediate pair. Rosa Mishkin and Hilda Burgess were second. Other placings were:

Another tournament affected by COVID was the Wellington Sixes, scheduled for the weekend before the National Swiss. This time, the unavoidable cancellation of the Taranaki Congress left many local players looking for their next bridge fix. So, club manager, Bridget Hannaway-Willcox, already working on both the “sixes” and the coming Swiss 15A, had to cope with extra demands from players searching for others to form a team of six.

There were eventually 10 teams taking part, with the following winning pairs within the three grades. 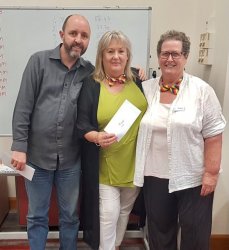 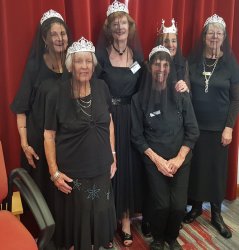 Ross and Pam were the Open pair in the team.

The Masterton Open, held on the 21st March, had just the right number of pairs (28) for an interesting format. In the morning, each of the 14 NS pairs played 2 boards against each of the 14 EW players. In the afternoon, the NS players took part in a Howell movement, and ditto the EW players. After those 26 boards, each of the 28 pairs had played 2 boards against all the other 27 pairs. No lucky breaks in that format - e.g. no one could avoid the eventual winners, Sandra Coleman and Mindy Wu. Ray Gruschow and Peter Delahunty were second, with the leading locals Ngaere Webb and Judith Nicol coming 6th.

The second half of March also had plenty of challenge for Intermediate and Junior players. Kairangi tested its first Rita Angus Teams competition with 4 Junior teams and an impressive 14 Intermediate teams. I guess the message about practicing for Interclub was taken on board. Both tournaments played 5 rounds of 10 Boards. 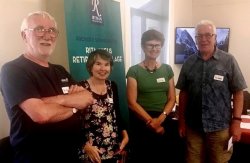 No need for a Swiss movement in the Junior Teams. With 3 opponents and 5 rounds, you played two teams twice, and the remaining team once. The Scott team (above), all Kairangi players, won handily.

The next week saw many of the Intermediate players travelling to the other end of town to play at Upper Hutt in their Pairs. The event also attracted others from more northerly regions, and got up to a credible 32 pairs. John Roseveare and Neil Sargisson headed the field on 61.5%. Also over 60% were the second pairing of Ivan Luketina and Anne Wiltshire.

Juniors apparently are more “close to home” people, not so much travellers. I didn’t see many entries to the Junior tournament early on, and haven’t seen any results, so I assume the tournament had to be cancelled.

This year, we made some adjustments to improve the conditions for the hosting clubs. While we’ve lost a few Junior and Novice teams, I suspect it’s more the impact of the pandemic on last year’s induction of new players, and not so much the $1 increase per player in table money. We had held prices for many years, including our subsidies for the more distant teams. Good for the players, but becoming less attractive for the hosts over time.

Rubber bridge entries are coming in. Our convenor comments that, this year, over a third of the entries so far are Grand Masters, with at least another third being Master and above. So, the competition isn’t appealing so much to our local Provincial Masters and below.
Health and Safety

As well as information about COVID-19 responses, many local clubs are emphasising health and safety on their websites. The Paraparaumu club have updated their policies and procedures, as in the following link.

Wellington Free Ambulance have provided “Heartbeat CPR training” courses to the club in recent times. So, there is both theory and practice.

The free CPR Training Course sponsored by Wellington Free Ambulance held on behalf of Paraparaumu Bridge Club on Monday 22nd February 2021 was highly successful. Five club members and eleven friends were in attendance which was a 45% increase over the first course held in November 2020.

Every minute that nothing is done to a person who is not breathing reduces their survival rate by 10%.

Building Manager, Alan Stevens, commented that the recommendation was that "we seriously investigate the various options for improved access to a Defibrillator."  The club has a sound Health and Safety Policies and Procedures. 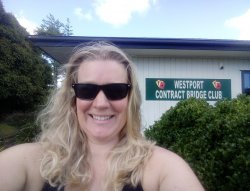 With our borders still closed, Sharleen Grounds (from the Karori & Victoria clubs in Wellington) decided to do a South Island road-trip in her car camper and visit some bridge clubs on the way.

During her recently completed month long adventure she played at 19 of the 37 South Island affiliated bridge clubs.

From Takaka all the way to Geraldine, Mosgiel, Balclutha, Te Anau, and back up to Westport, Sharleen says she had a great time experiencing all of the friendly local bridge camaraderie and wanted to thank everyone who played with her and found partners often at short notice.

She hopes to be back again next summer to play at the remaining 18 South Island bridge clubs but in the meantime plans to visit more of the 74 North Island clubs (she's been to nearly 50).