A Passion for Bridge

Meet Sonya Adams. You may not have heard of Sonya especially if you do not live in Central Otago. However, she is having a big impact on the Wanaka Club which has just started two Learners sessions at the club with 44 attending, more than double the number the club usually has.

She introduced herself by saying: “I’m so passionate about the game that I've taken in my stride to spread the word and recruit new members to our club and surrounding regions.”

The new members she has found are not only more in number than usually come but the age range is much younger with the majority in the 40’s and 50’s. Sonya is not a bridge teacher but has been involved majorly in increasing the number. Indeed, it was only a couple of years ago that she went through the classes herself. She has fallen headlong in love with the game and wants everyone to be playing. She sets her sights high!

She has run a Bridge Awareness Campaign, on Facebook, in the media, around town in Wanaka and most prominently at the huge two- day Wanaka A & P Show, the largest such show in the South Island with some 45,000 people attending from all around New Zealand. A large number of those would have left rather the wiser about the card game, bridge.

There were 562 trade sites divided into two categories with a prize being given for each of the Large and Small Trade Sites, just one prize for each category. The small Trade Site’s award went to the bridge site. 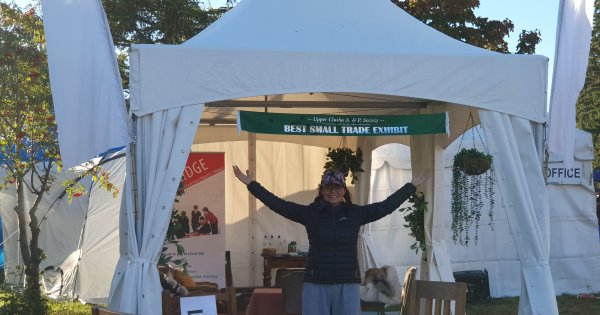 Lynne Fegan, former NZ Bridge Board member, and involved with the Show’s organisation commented: “I was stunned to hear them say that apart from the set-up of the site and enthusiasm of the operators, it was the energy which was being exerted and ‘props’ which they used to entice visitors to the stand.  I presume they were talking about the magician and the masks.

Many people interacted with us, and those that did show interest were given the generic brochure we produced. The brochure explained what Bridge is; and to contact NZ Bridge for further information.”

All peaceful at sunrise

Lynne also commented: “The site was set up in such a ‘relaxed’ and tasteful way that it became a drawcard for people to sit and observe/listen; had huge numbers stop by the site and achieved large numbers of contact details from interested persons from Wanaka and elsewhere (even North Island people!).” 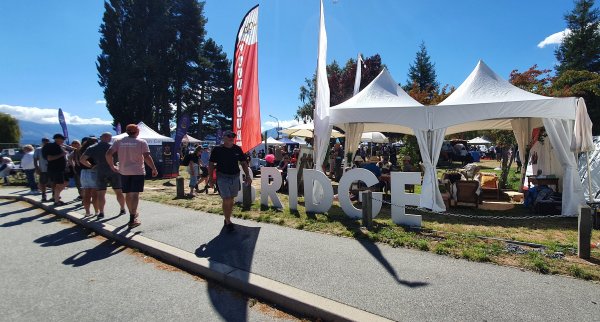 Bridge by the road side. You just could not miss the sign.

The site was just inside the main gate opposite the ATM machines, in the hub of activity. Sonya organized a marquee rather than a gazebo. The site needed needed to be well protected from the wind but opened up on three sides.

Sonya enlisted the help of volunteers from the local club to play in two- hour rosters and at the peak times encouraged these players to dress up with large animal faces. Members helping at the stand wore ‘Queen of Hearts’ outfits, and walked around the show drawing attention to themselves and talking about playing Bridge. 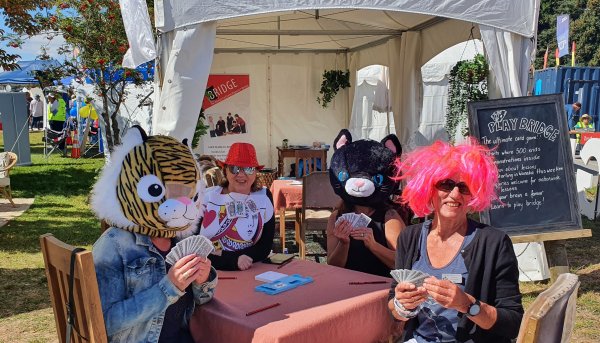 The animals take on the humans

Meanwhile, Sonya, in her panda hat, walked around the show distributing leaflets about bridge and also provided a commentary about what was happening at the bridge table.  Jude Bailey was “grabbed” and shown the Bridge stand and the immense activity going on at the stand. 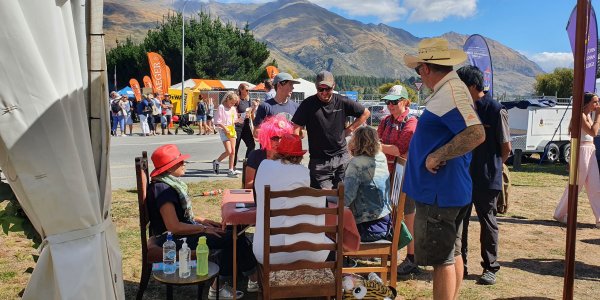 A game for all seasons, that’s Bridge.

Sonya also had a series of questions to ask people and whatever they answered, there was always a positive outcome. According to Sonya, everyone walked away from the stand or from talking to her with a smile on their face, just like when they will do, we hope, when they sit down at the bridge table. 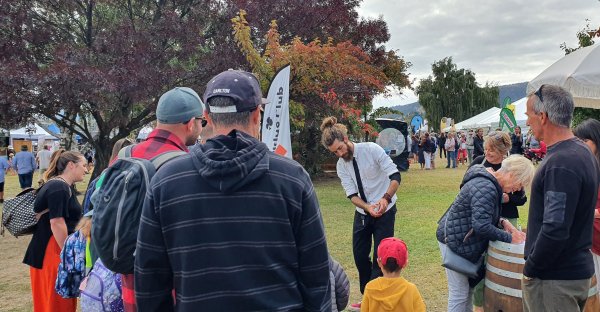 Tricks…but not at the bridge table!

Sonya employed a magician to do three card -trick shows each day. She had giveaways, brochures, a flyer about the up-coming Wanaka Club lessons. She took names of interested people with out of towners’ names and emails to be passed on to clubs in their area. Her thrust was therefore not just local but national, too. She also unearthed five South Island schools which might be interested in having Bridge taught. She is the first to acknowledge all the support she received from her local club, from the Region and from New Zealand Bridge. A pecial thank you to to Jude Gunn.

Sonya is not teaching the locals how to play but she is there at the classes as one of the helpers and communicates with all those learning by email after each lesson and gives them encouragement before, during and after the lessons. 72 signed up for the lessons in Wanaka with the remainder above the 44 who started saying they would start later this year or in the future. Sonya will be ensuring that they do not forget this commitment. She will also be ensuring where possible that the new players move on to club sessions, with the help of supervised play sessions.

When Sonya received her award, she gave an impromptu speech about our wonderful game to the about 2,000 gathered for the presentation. Her Awareness campaign, centered around the A and P Show has already had a great impact on the numbers taking up the game in her local area and could even impact further afield. I think and hope we will be hearing a lot more from Sonya in the future.