Well, your contract did and you seemed to do nothing wrong: just bad luck, perhaps. Occasionally, you get that no matter at what level of bridge ability you play. How “bad” was the luck here?

) and then offered you a choice of games. West led

9. Plan the play. Both opponents have at least 3 diamonds.

The lead looked nice and passive and seemed to offer no threat. Maybe it was from a doubleton though there would be very freakish distribution if it was a singleton lead. So, our declarer won the lead in dummy and took a losing spade finesse. Back came a second heart and South won and laid down the

A…but there was some bad news in that there was a second spade loser: that

South was not too worried and crossed to dummy to tackle the club suit and played a club to their 10… and there was no saving grace there as that lost to the queen. West followed that up with the ace and with the second trump loser, that meant "contract down" . Unlucky, but how unlucky?

There was nothing that South could do about the club losers. There was no end-play possible. If West had

AQ, then so be it. Bad luck! Also, if West held

AQ, then cross them off your Christmas Card list! Most unfriendly! It is very normal to blame an opponent for being responsible for the vagaries of the dealing machine!

However, was it the best play to take the spade finesse? Playing Match-Point Pairs and hoping the trumps were 2-2 with East holding the king, you may indeed play to the queen and hope to score an overtrick, maybe even two. “May” is the important word. Even at Pairs, you do want to make your contract.

We can discount the situations where West has 3 trumps. Our situation is hopeless. Also, if West held

Kx, it is irrelevant how we play trumps. What though if East had three or four spades? If they have all four, then we have two trump losers, no matter how we play.

What then if East has three trumps? That, of course, was the situation. Where  West’s singleton was not the king, you are safe by starting off with the

A as long as you then cross to dummy to lead a second trump towards your queen. The danger of this line is when East has

Kxx and a doubleton small club and then scores a club ruff.

Maybe it’s time to check out the chances of that happening, that is the 3-1 spade break in a particular hand and the wrong 4-2 club break. The combined chance is around 3%. Meanwhile, the 3-1 break with king singleton offside is double that at about 6%. A mathematician’s field day!

So, there are three ways of playing the trump suit. Ducking a trump first of all is most unappealing as you will not know whether to finesse on the second round. Taking the finesse will cost when that

K is singleton while laying down the ace will lose when you later suffer a club ruff, a smaller percentage chance.

It was a shame that our South did not take perhaps the safest line because on the actual hand, many had a most uncomfortable situation when the board was played by North:

Three rounds of clubs saw East ruff the third round. Now, the trump guess becomes really hard and several declarers took the trump finesse to fail in their contract even by two tricks as East scored a second club ruff. 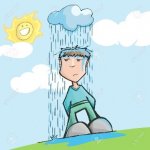 When that happens, it really is not your day. So, the deal should have been a triumph for our South’s upgrade or for those who play transfer responses to a 1

Would you as South have made this contract?

The two hands below were dealt some 35 years apart. One may not even have been dealt by a dealing machine! The other occurred two days’ ago!

Take a look at them and guess what they have in common. A small clue is that the players who held them made the same bid.

Is "pass" a bid or a call? I always get muddled! However, do you think that is the right answer?