The two hands below were dealt some 35 years apart. One may not even have been dealt by a dealing machine! The other occurred very recently!

Take a look at them and guess what they have in common. A small clue is that the players who held them made the same bid.

Any name mentioned in this article bearing an extremely close resemblance to current bridge players is entirely factual.

“When did you last play a doubled contract, not make one trick and pick up 14 imps for your efforts? This is what happened to Richard Solomon at the Auckland Club on the following deal:

The bidding may seem amazing but was true.

J732 in the opponent’s opening suit.

East led a diamond and the defence made short work of taking all the tricks. North was 7 down for -1300 “(This was 1987. In today’s scoring, that would be -1700) “Richard’s teammates had no problem in bidding the grand slam and this was worth 14 imps to Richard’s team.

On the next deal, West displayed the very good sense of giving his opponents a free rein in their bidding. Not an easy thing to do holding a solid 7 card suit with 14 hcps.

after the diamond weakness was exposed when the opponent overcalled 2

A reader requested advice about the legalities of psychic bidding. An opening psychic bid or overcall which carries no conventional forcing meaning or implication is a legal bid. A player may make any call or play including an intentionally misleading call such as a psychic bid without prior announcement provided that such a call or play is not based upon a partnership understanding.

Psychic bids should be used with discretion as any ethical doubt regarding psyches can do immense damage to a player’s reputation.”

I wonder then what Jan would think of the following action at the very recent Anzac Congress in Wellington. It was a kind of psyche though it is known as a Comic No Trump Overcall, which shows either a balanced 15-18 or some zany outlandish hand, a weak hand that cannot be shown in a conventional way. I know there is another way to describe these hands, using the "Pass" card:

Some high-card strength?       Maybe or maybe not.

was a Bergen Raise showing 6-9 hcp and 3

was artificial asking whether their partner was minimum or maximum. Well, you got yourself into this pickle. How are you going to get yourself out of it? The first double appeared to show clubs…and the second?

In case you think this was not one of our top players who faced this problem, you are wrong as it was none other than Peter Newell. Stepping into the “black yonder”, he tried 4

and perhaps much to his relief, there the contract rested without even a double. His partner (Martin Reid)’s hand might explain why:

There were soon 10 tricks with just one loser in spades, hearts and diamonds. At the other table, the contract was 5

Each side could make a 4-level contract in two suits.

with 1NT in the first auction many years ago, you might consider that justice was served. 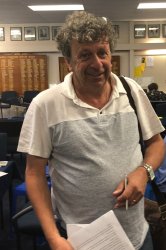 +26 imps for our 2 1NT overcalls. Does this mean everyone should try them? I had better say I do not think so, at least not without an understanding partner who will often accept imps in the “out” column.

Which game? For less experienced players and others.

was a Weak 2, 6-10 and a 6-card suit. 2NT was the Ogust convention asking your partner what type of hand they had for their opening bid. 3

said the suit and the hand were good.

What is your choice of final contract? Both sides are vulnerable and it is Pairs.