Welcome back (again!) to the Auckland/Northland Regional Roundup. We are now pretty much back to normal, with the tournament schedule running full tilt. Phew!

But first, a shout out for our local megastar and NZ’s only Platinum Grandmaster, Michael Ware. Even by his own lofty standards, he has had a stellar start to the year, with no fewer than EIGHT tournament wins all around the country, most of them in major events such as the South Island Teams. He has formed a very productive partnership with Malcolm Mayer, but has achieved his successes with no fewer than five different partners. Way to go, Michael! 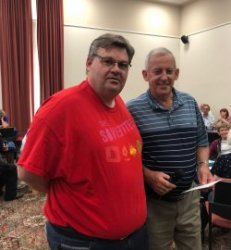 Next, here is a hand that caused conniptions all round the room from the National 15A Swiss Pairs in Wellington back in March: this hand was described by Our Editor in his report on the event in March. A superbly run event, with Auckland based pairs filling many of the top placings (so that I can justifiably mention it in our news!).

For me, this was the 99th hand out of 99 for the event. We had been having a reasonable match up to that point, and I prayed for a quiet boring 3NT or something like. No such luck from the Bridge Gods – I picked up

the kind of explosive freak that will lead to a huge range of results. While I was wondering how I was going to bid this, the hand on my right opened 4

. This actually makes things a little easier, because you could now bid 4NT, showing a strong hand with two possible places to play, although many of the top players consulted by Richard chose to bid a direct 6

. East will presumably try diamonds after 4NT, and the partnership will probably reach 6

. This is doomed to fail, as the defence can repeatedly force declarer to ruff by leading spades and/or diamonds, and the club suit cannot be set up in time before one of North’s four little hearts becomes a winner.

However, I noticed on the results sheet that Biritch the Russian Blue had actually made 6

. So, I asked him how he had managed this. With a dismissive wave of his tail, he described how he had lured North into a fatal error. He won the spade lead covered by the king and ace by ruffing in hand, and immediately played ace and another club, ruffing in dummy. Noting the favourable break in the

suit, he now played the

Q, discarding a club from his hand and North… trumped!

This handed back control to Our Hero, who ruffed the return, ruffed a second club with the

K, drew trumps and claimed. Of course, Biritch played at his usual speed of light, but a little reflection from North might have led to the following conclusion. When Biritch discarded a club, he clearly had no losers in diamonds, and North should wonder why he is being presented with a cheap trick to which he apparently has no right. The answer must be to induce him to ruff, thereby enabling declarer to maintain control: and so he should decline this Greek gift. Timeo Danaos et dona ferentes.

And so on to our tournament results. Back in March, East Coast Bays held their annual combined Open and Intermediate tournament, with Gong Yunfei and Prem Soundra taking the former (with exactly the same score of 61.66% in each session!) and Alec Isaacs and Geoff Sullivan the latter. Gong was back in winning action a few days later at Auckland’s March Thursday tournament, this time with Julia Zhu. Mt Albert also hosted a joint event in March, with Pat Williams and Gillian Goodall the victors in the Intermediate section, and Rebecca Gane and Felicity Drumm in the Juniors. Over the bridge (!) to North Shore for their popular Swiss Pairs: this again featured the recently instituted separate North-South and East-West fields, with “That Man”Michael Ware and Malcolm Mayer leading in the former (and with the overall best score) and George Sun and Alice Young the latter. Howick’s combined Intermediate/Junior tourney saw Nina Gebler and June Hughes walking away wearing the laurels.

The big event of this report was of course the Easter Congress held at Auckland. The 10A Open Pairs was again split into separate North-South and East-West fields: Tom Jacob and Brian Mace led the way in the former, but in the latter Grant Jarvis paired with Leon Meier to win with the best overall score. This represents a sterling debut for Leon, still just a Local Master, and coming on the back of his third place in the South Island Teams. The concurrent 8B Restricted Pairs was taken out by Graham Wakefield and Leah Andrews. The Open Teams was a runaway win for the all- international quartet of Michael Cornell, Ashley Bach, Michael Whibley and Matt Brown, who had the event wrapped up with a match to go and finished 26.43 VPs clear of the field. The Monday 3A walk-in event provided a win for Alan Dormer and Ray Kingston in the North-South direction, and Peter Ramsey and Noel Woodhall East-West.
TeamsWinners                   Top in Open Pairs                                             3A winners, North South and East West 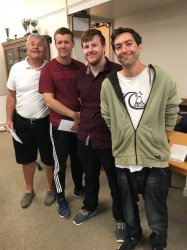 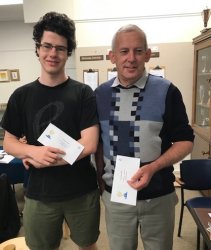 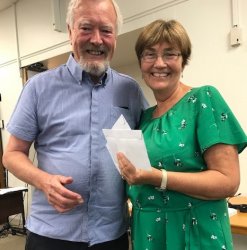 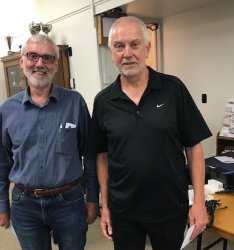 At the Waitemata 3A in April, Patrick Carter and Julie Atkinson decided to celebrate their selection to the New Zealand Senior team to contest the Zone 7 Championship against Australia (and put in some hard yards, of course!) with a tight win. However, they could only manage the runners-up spot a week later at Hibiscus Coast, where the red-hot Michael Ware won with visiting Irish international Hugh McGann. At the Franklin Restricted event, John and Val Tetley dominated with sessions of 65 and 64%. And lastly, I took a brief sabbatical from being regularly castigated by Biritch to play in the Auckland Club’s Anzac Day Pairs with the redoubtable John Buckleton. Fortunately, John’s play was good enough to rescue us from a modest first session with a 65% in the second and secure the trophy, sponsored to St Vincent’s homes. 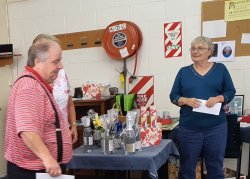 And finally, a little story from my Improvers Class at the North Shore Bridge Club that is worthy of the famous Rueful Rabbit.  The RR, if you recall, was one of the characters in the late Victor Mollo’s super series of Bridge in the Menagerie. His primary characteristic was his extreme nervousness at the table: this usually led him to do apparently ridiculous things which invariably turned out for the best. This particular lesson was on declarer play in no trump contracts: West will open 2NT, and East should raise to 3NT with 6 points and a decent suit. North will usually lead a spade, and declarer can see that she will need tricks from the diamond suit. If the first spade trick is allowed to win in the dummy, the defence can then cut off the diamond suit by holding up the ace twice.

At the table where I was watching, declarer played

9 from dummy and (possibly flustered by my presence) produced the

K from her hand. This elicited a growl from her partner (you might perhaps recognise another of Mollo’s characters?) - “you were already winning the trick, partner!”. Even more nervous, declarer apologised that it was too late to correct it and played on. And, of course, the play is totally necessary, because it guarantees an entry in the spade suit to the long diamonds!