Greetings all. It’s me again, here from the Winterless North.

The last few months have been very busy with tournaments galore and we are seeing more and more visitors to the North attending these events. It’s nice to see new faces as it throws an “unknown” into the mix which always creates a bit of excitement.

Our first tournament since my last report saw an Auckland team take out the Barrells 100% 5A Teams in March. Congratulations to Gary Chen, John Wang, Gong Yunfei and William Liu with a convincing win over the Wen team, also from Auckland. In third place was the “house” team, made up of Roger and Cynthia Johnson, Vivienne Sexton and Lee Orton. Very exciting for these players as Vivienne and Lee have never played before and all but Vivienne are Intermediates. 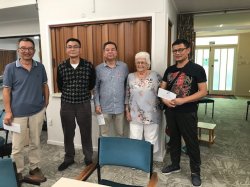 April was the Quail Ridge Twin Salver. This is an 8B and was won by Bob and Sue Brown with Arlene Purdie and Roger Topliss in second. Bob and Sue are pictured here with the trays and Jill Cottle representing Quail Ridge. A plug here for all of our Sponsors. We are incredibly lucky to have these sponsorships and hope that anyone who is tossing up as to what to buy from where remembers the generosity of these companies and individuals. 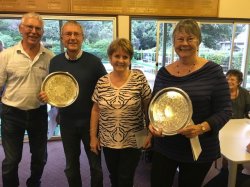 Next was the Broome Family 8B tournament. Jayne is very passionate about her bridge and likes to encourage new people to come along and “give it a go”. Because of this, we had several brand new tournament attendees and Jayne very generously awarded a prize of a very nice bottle of her family’s alcohol to the last placed pair. It was great to see the excitement of the recipients knowing, at their very first tournament, they had won a prize. The winners of the Intermediates were Laura Maton and Judith Byrne. 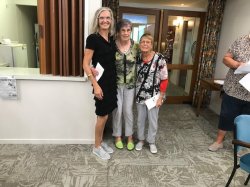 (Jayne seen here wearing another of her fabulous outfits with Judith and Laura), and the Open section winners were Matthew Brown and myself. It was particularly pleasing for me as I introduced Matthew to the game 10 years ago and this tournament popped him into the Top 100 all-time point scorers list.

May 1 was the Kerikeri 8B Dolphin Pairs. This was a big day, playing 60 boards and again it was pleasing to see visitors from outside of the area including Franklin and Auckland. However, there can only be one winner on the day and although Bill and Soldotna Humphrey had a massive 68.21% in the morning, they were “pipped at the post” by myself and Neil Ruddell with an overall average of 63.42% against their 63.16%. Top Intermediate pair were Jolene Zink and Diane Russell who finished a credible 8th across the field. This means a two-all draw between Margaret Hooson and Neil Ruddell, with a treasured ornament on the line at the end of year, based on results. 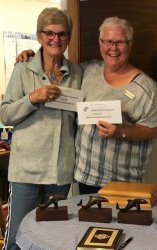 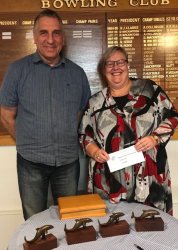 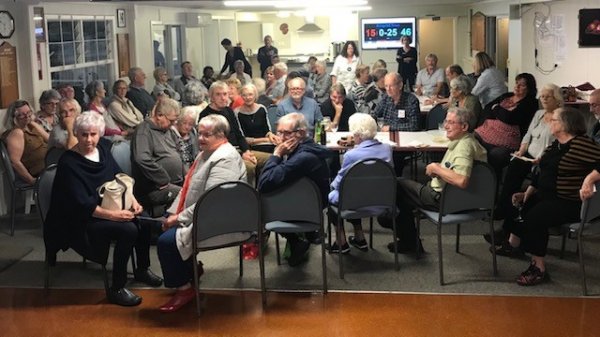 A full room waiting for the prize-giving at Kerikeri. While some players have
to leave before prizes are presented to catch planes etc, it is nice to see those
that can stay do so.

Recently, at the club rooms, a newspaper article was left for members to read. This article was from September 13 1987 and is hilarious to say the least. The Fanatical Faces of Bridge. It has a 13-year-old Ashley Bach pictured and mentions several well-known players and some of their antics. They couldn’t get away with writing an article like that today!!!  It’s great to see many mentioned are still playing including some from Whangarei and Kerikeri players. Well worth a click on the link below to read.

In this Round up I also want to add huge congratulations to Jane Stearns who was the top Northland Player in 2020. Consistently good results in the Northland tournaments with 6 different partners meant Jane was awarded her trophy and the cash award that went with it. A great result.
Northland Player of the Year 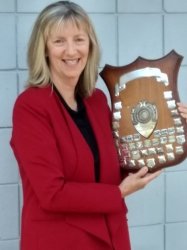 And last but not least a hand from the Kerikeri Dolphin Pairs. As you can imagine the bidding was fierce.

At my table South opened a Multi 2

. Needless to say the contracts were all over the show from 3NT, 4

and one very ambitious 7NT (which was somehow allowed to make). Small slam can be made in clubs, diamonds and hearts but only 10 tricks, supposedly, in no trumps.

That’s all from me. Keep safe and we hope to see you up here in the near future.