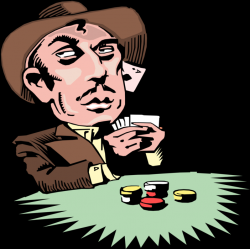 Beating the Gambler? for less experienced players and others.

Much of Bridge bidding is relatively scientific to reach the best possible spot for our side…and then there is the Gambling 3NT opener.

South’s opening bid shows a long solid minor suit. The hand will not hold an ace or a king in any other suit.

Obviously, from your holding in the minor suits, the suit is clubs…and it is your lead?

Seven or eight clubs headed by the AKQ and often by the jack as well. Perhaps the odd stray queen or jack in different suits though South is relying on their partner to gain the lead and then they will enjoy scoring lots of club tricks. So, by North’s pass of 3NT, we know that North has at least one club (with a void, they would bid 4

to play depending how strong a hand they held) and some high cards with which they hope their partner can win the lead.

This is not a situation where you can lead a low card from a strong suit and hope to regain the lead to score more tricks. It may be trick 11 or 12 before your side regains the lead: too late!

Against such an opening bid, you must attack with a high honour, preferably an ace. Lead an ace even without holding the king, and if that lead looks unlikely to work, switch to another ace or if you do not have one, another suit where the dummy is fairly weak. You know South has no kings. If when you see dummy and your initial lead will not work because the king or maybe QJ are in dummy, switch to dummy’s weak suit. Strike early or not at all.

If only our West had taken the above advice when they led to trick 1.

West chose to lead a small heart. South took the opening lead and pounded out 7 rounds of clubs. It still looked like the defence should prevail if West retained at least 3 hearts,

A and another card while East can retain

J and their top three diamonds. The defence should have taken the last 5 tricks but at trick 13, West had retained one too many spades with the trick being won by South’s

It is always easier to defend, especially to discard to a long suit when you can see all four hands. It would all have been a lot easier had West started off with the recommended

A lead. West would be able to see all the small diamond cards and could recognize their partner’s

10 (high encourage…make your signals to partner as clear as you can) as a clear “come on with another diamond”. The defence would have then taken the first 7 tricks, down 3 without any awkward discarding involved.

The Gambling 3NT is just that. North was ever hopeful in passing 3NT and got lucky when West forgot the guiding principles for leading to such a contract.

A Gamble or a Certainty?

So, are you with us? The opposition have been bidding a lot. Would you like to take out the red card?

Oh, I suppose you would like to know what it all means.

promised an undisclosed shortage (singleton or even shorter!) , 4 spades and 10+ hcp.

asked where the shortage was with 4

saying it was in diamonds.

showed 2 key-cards but no

It is still your bid?