You may have won the moral high-ground by not opening your Weak 2 in a major because you have four cards in the other major but you have now to decide what your hand is worth, how high you should go and what agreements you might have to a jump into the “spade stratosphere”. Maybe it would have been easier to have started with a weak 2 opening!

You elect not to open a Weak 2 being outside the range and having a 4-carder in the other major. However, the time to take action has now come.

We have bids all the way up the line. Starting low are:

: This auction will not end here; I have 4 points and East could not bid. Partner is likely to have a strong hand and will bid again, or opener will be strong and will bid again. If partner raises my suit, or bids hearts, I can splinter in clubs to get my hand across.

I do not want to mislead partner by bidding 2

cannot be right as partner may have hearts or a strong hand with clubs. If that is so, my pre-empting the auction is likely to work out badly.”

Not necessarily with agreements.

: Now that sounds pretty wimpy but I'm certain that won't be the end of the auction. I have the boss suit and plan to take another bid when I find out the lie of the land.  It is possible that partner has a "double and bid" hand with clubs. I may even be able to get my shape across having started so low.”

:  For now. Will bid my head off subsequently. Bitter experience has taught me that showing extras on weak hands leads to getting too high and going minus. Limit my hand first then show strength later. The best reason for not jumping in spades and pre-empting your own auction, misleading partner as to your high card strength, is that it allows partner to show their strong hand with clubs (or a good day, hearts.)”

if partner has a classical takeout double but he might have a strong hand with clubs. So, I'm going slow and taking the slight risk of 1

being passed out when we have a game.”

will be passed out but if we have an agreement that fast arrival shows this kind of hand, then I would be happy to get there quickly. However, the chance of a missed heart fit is a concern if we bid directly to game in spades.

: Slightly reluctantly. It feels right on playing strength with 6/4 in majors and a good spade suit.  However, I am worried that partner has a strong hand in clubs and may not be major oriented. My hand certainly will not be suitable for that and partner will expect a few more high card points. So, while an underbid, I don’t mind 1

too much, and then bidding 2

is also plausible as I think it normal to play as something like this – weakish values but a good long suit and some playing strength opposite a normal takeout double.”

bid is pre-emptive, it would be perfect and highly suggestive that we have 4 lousy hearts (because of our initial pass)

: I am concerned that partner may have the strong hand with a good club suit, but that means that 4

will still be the bid I make.

If partner is minimum for the double, they will have short diamonds and 3+ spades so that 4

with a likely 10 card fit should be fine. If partner is stronger, then they will take care of my outside losers and I will worry about the trump suit. 4

is a long spade suit by me with no real aspirations to any higher contract. With fewer spades and a stronger hand, I would proceed by bidding 2

: If partner has a normal take-out shape, I expect to have play, perhaps good play. No fancy footwork is going to help me judge that, so I may as well exert maximum pressure on the opponents. Partner should expect a weakish distributional hand with 5 plus spades, given that I did not pre-empt or open the bidding. If partner has long clubs and 3NT is best, he may well have bid that earlier rather than double.

. I understand the reluctance to pre-empt with four cards in the other major, but that fear is overdone. A 4-4 heart fit with weak trumps may well play worse than spades. In addition, if West has minors and fewer than four hearts, he may have unpleasant options over 2

. Double will be unsuitable and 2NT natural. Of course, with four stronger hearts I would pass, as South did here.” 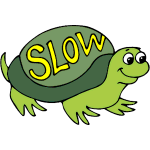 So, a choice of four bids with those whose bids were at either ends of the range seemingly a bit more comfortable with their choice than those in the middle. If I know my partner will pass 4

, then that seems a reasonable option. At the table, North did not see it that way:

had no play on this day. I do have a lot of sympathy for Stephen Blackstock’s direct jump to 3NT on this board, as long as you can get South to respect this and pass. 3NT is certainly the easiest place to get a game contract though 4

looks fine too with the

J dropping doubleton. How to get partner to stay there is the question for South? Otherwise, South must pass their partner’s 3NT call on either the first or second rounds of the auction.

That’s a good ploy when you are in 6

is a limited opening with less than 16 hcp. 3

is a weak jump with 5

specifically suggesting South bids slam with a control in the enemy suit. You oblige and receive

P.s.We will give the results and a little commentary on this last weekend’s on-line Test matches against Australia tomorrow.