Do you remember your first A Point?

It seems that the urge for overseas travel has burst out - in the form of internal travel to other regions’ bridge tournaments. The result is that we’re all playing so much bridge these days that I’ve hardly time to write this update, and you probably don’t have enough time to read it.

The Karori Club held the regional 3A Mixed Sex Pairs, as usual, on Easter Monday. Prizes were awarded in three grade categories. First in the Bronze group were local players, Pauline Edwards and Klaus Dorbecker, both Intermediates. They also came 6th overall out of the 30 pairs, so each got their first full A point. 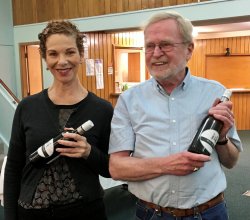 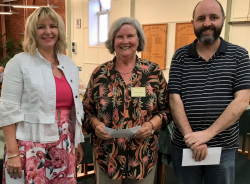 Anne-Marie Russell and Nigel Kearney were the overall winners. 70% in the second session sent them to an average in the mid-sixties, well ahead of the rest of the field. <<photo, with Annette Prebble, past President of the Karori Club>>

South Wairarapa’s Intermediate Tournment was held the week before the Wellington Congress, a good chance to warm up. Judith Smith and Clare Crossling topped the 33 pairs, ahead of Simon Webber and Jeffry Craanan.

Michael Ware and Malcolm Mayer had a great Congress. They shot out to a big lead in the Open Pairs. But, in perhaps their biggest (and only) lapse of the weekend, they didn’t quite make 50% in the third session, enabling Nick Jacob and GeOTislevoll to overtake them for first place. 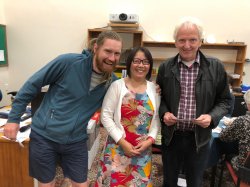 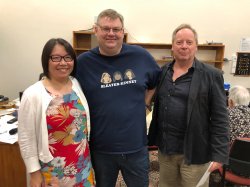 16 pairs entered the Open Restricted grade, won by Marsha Woodbury and Virginia Warren, ahead of the Wellington region locals, Alex Drummond and David Esterman. The Intermediate competition attracted 32 pairs, once we add in the Juniors. Alar Treial and Royce Johnston won from Karen Oswald and Darren McCutcheon. 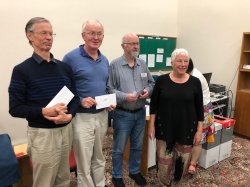 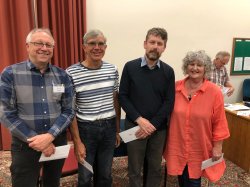 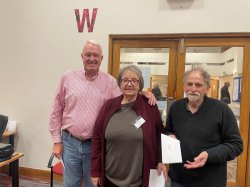 There were 10 teams contesting the Open Restricted Teams. Illness resulted in a last minute change to the Michael team, but this didn’t completely ruin their day. The rejigged team came first ; Alex Drummond, Sophie Atkin, David Esterman and Helen Fitzgerald.

Megan Eddy, Bridget Wilcox, Barbara Robinson and Carol Dickson were yet more successful visitors, winning the Intermediate teams, ahead of the team from the Kapi Mana club. 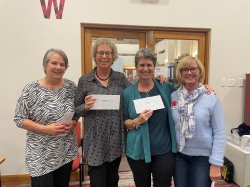 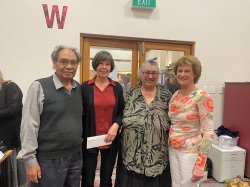 Michael and Malcolm continued their winning way in the final event, the 3A Swiss Pairs. Johnny Davidson and Jack James were second. Lynda Rigler and Peter Delahunty came third, the only pair to win all six matches.

The Hutt Bridge Club held its Open and Junior tournaments on the same day, 16th May. The 30 pair Open went once round for each session, a 60 board match. Les Gould and Gary Duncan headed off Pat and Martin Oyston, with Jan Whyte and Ken Bateman third. There were 12 pairs in the Junior tournament. Pam McLean and Clive Phillips, of the Kapi Mana club, led from locals Neil Sargisson and Jacob Pilalis, with a 6% margin to third place.

Our most recent tournament has been the Otaki Multigrade, with a full house of 48 pairs. Nebojsa Djorovic and Donna Upchurch, averaging 64%, were first, with Ruth Brucker and Sandy McKirdy, 62.7%, second. Anne Baird-Horner and Tim Horner were 4th, the first Otaki club members. The other grade placings were: 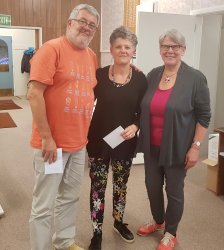 The first two of the above pairs came 7th equal, averaging 56%.

Interclub has just completed its third round. The leading teams at this stage are:

The second place in the Junior/Novice group is held by Kairangi 2, the Sarah de Groot team, one of the five novice teams.

At this stage of our local Rubber Bridge competition, when I last looked, we had 16 pairs still in with a chance. I expect the next update will drop this considerably, but I’m in no hurry to look. One of the 16 is a Novice pair, and I’d like to think they might still be in there, competing for awhile longer.

Each year, the Regional Committee presents trophies, some going back nearly fifty years, to the persons getting

(1) the most A points in Wellington region events

(2) topping Intermediate Tournaments (scoring is 5 for a win, 4 for second, etc), and (3) the winner of the Junior League (scoring - complex, but it covers most bases).

At this time, the leaders in those three ladders are (before the audit checks): Open - Alan Grant/ Anthony Ker, Intermediate - Jeffry Craanan/ Simon Webber, and Junior - Neil Sargisson.

As well as many club tournaments, there is the Wellington Regional Teams tournament at the end of June. We’ll also hold a social event in mid-July for local clubs, where teams of 4 pairs, one in each grading (O, OR, I & J) compete for prestige and a well-polished cup.

Much further out, in early September, we aim to hold a meeting of the twelve local clubs. It’s time for a catch-up.