Any Day Playing Bridge is a Fun Day.

Today, we farewell Karen Martelletti with a celebration of her life at the Tauranga Bridge Club, an event being live-streamed for those who cannot be there. In the normal course of events, Karen would have been playing bridge at the Victoria Swiss Pairs last week-end, one day after the National Conference of the Board of New Zealand Bridge which was held in Wellington.

She may even have held the hand which features today. Certainly, the hand reflects the above title.

West would have been a little surprised by their partner’s second bid. With North poking in a double, East’s third bid showed two key cards and the

The above was the sequence which occurred at one table. West might have wondered how good their hand was after their partner opened the bidding. North’s low-level overcall enabled East to show that there could be great potential for a high-level contract, with hearts as trumps.

Indeed, all West wanted to know was whether their partner held both the

AK. Quite probably the king did not matter since with a minimum 11 trumps, it could easily fall under the ace if it was missing.

. So, that might not work here as you would not want partner jumping to grand missing the

, an unusual jump,  as precisely that.

A in partner's hand getting in the way….and that is exactly the problem encountered when East replied 5

after North’s double of 4NT. This was a rare time when “DOPI ROPI” principles could be used, with here pass and redouble showed the first two steps and 5

acting as the fourth step, indicating one key card was missing. Which one?

Well, West was probably ill advised to double 4NT as that almost certainly gave a clue that they might hold solid spades, hence meaning East had the top two hearts. West thought so as they jumped to 7

….and then came the agonising long wait. Which opponent was going to double with the

A? North did not and neither did South.

9)…and East had the very good grace to table their trumps first!

What? Three key cards! If you are going to muddle an ace-ask response, ‘tis better to have more aces than you promised than less!" West challenged South to ruff the opening lead…nearly but they had nothing with which to ruff!

Somehow, I could imagine if Karen had been West and had found that the

A was missing after bidding grand, she would have been disappointed but not visibly so. There was no such problem here but no extra bonus for making the first 16 tricks!

Even though the vulnerability was against N/S, 1

seems a rather unusual choice of bids. Surely 3

would not be that risky…and such a bid might have made it a whole lot harder to reach the grand slam.

, East would just have to chance a 4NT Key Card and then a king ask (preferably “specific king ask”) on discovering all Key Cards were present. Knowing the partnership held all the Key Cards and

as a last attempt at grand slam if West held any extra values or shape…and the answer to both questions was this time a resounding  “YES”.

So, the grand should have been biddable however much pre-emption East-West received. 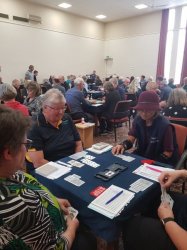 In remembering Karen, she spent so much time, put so much energy into the game of bridge and of course loved playing so much too, whether the bidding finished in 1NT or ended in grand slam, hopefully making! Thanks, Karen. A “grand” contribution.

"Any day playing Bridge is a fun day."

We all do it occasionally. We call it “hand evaluation” while perhaps it can be just plain optimism! Sometimes we downgrade a hand and then we can upgrade. Problems can arise when both partners upgrade on the same board! Tomorrow we can look why but for now plan to make your 4

contract with the following cards.

asked about North’s majors with 3

West’s lead is the