I’m proud to say I’m a week early with posting this regional round up although Richard reckons I am actually 5 weeks late (go figure!). Who was it that said they love deadlines? (not Anna!) I love the sound they make when they woosh on by!

It’s been a bittersweet month – with our region keenly feeling the loss of Karen Martelletti from Tauranga. There have been many tributes paid across the country and it was fitting to see the church and Tauranga Bridge club overflowing at both her funeral and subsequent celebration of her life.The Karen Martelletti Fund is in the process of being established to support the activities that Karen enjoyed and we look forward to seeing how this will progress and her legacy continued. 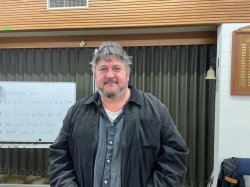 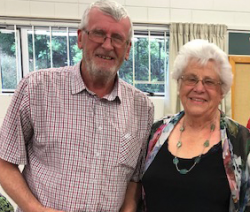 The Morrinsville 8B had a bit of a star-studded field but was won by ‘nearly’ locals Noel Grigg and Lesley Quilty from Matamata only a smidgen ahead of Rotorua’s Heini Lux playing with a Junior player Jackie Pulman.

The Putaruru midweek 8B tournament attracted an international pair alongside some slightly more social players. This time it was the internationals who prevailed with Australian Julian Foster and Waikato’s Jenna Gibbons topping the field. However, a pair who punched well above their weight were Matamata’s Anne Beetham and Margaret Reed who not only topped the diamonds division but got 2nd overall. 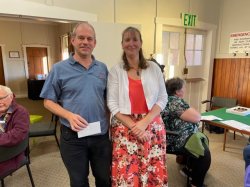 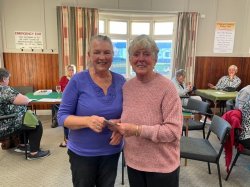 Julian Foster and Jenna Gibbons                   Anne Beetham and Margaret Reed
Sydneysider Julian had a hard job pronouncing "Putaruru" when interviewed on the Bridge Zone but he and Jenna certainly played good bridge there, as did second placed Anne and Margaret.

The Bay Pairs heat at Mt Maunganui was won by Rachelle Pelkman and Murray Wood (Murray and Rachelle are also leading the Bay Pairs after two heats). 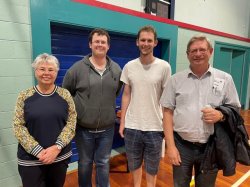 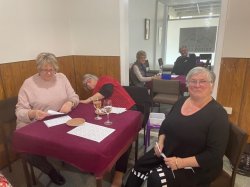 The fourth heat of the Waikato Area Pairs at Te Aroha was won by Gwyn Lobb and Kate McFadyen.   It was a close-run thing but, luckily for those who attended, the Te Aroha bridge clubrooms managed to have flushing indoor toilets available to the competitors with their toilet makeover being mostly completed in the nick of time the day earlier. Thanks to Pub Charity for a $61,000 grant towards the upgrade of their facilities. We think Ian and Pam Moore from Cambridge are leading the ladder in this event (but you can never be completely sure due to eligibility and sub rules!!)

Taupo 5A.  The last thing I said to Richard Solomon when Noel Grigg took my place in the Taupo 5A was “I don’t mind if you do well but please don’t get 8A points in the weekend” … but bugger me that is exactly what the two of them did.

Three session wins and overall first equal gave them the maximum points.  They shared the podium with David and Lynette O’Shaughnessy from New Plymouth.  So, in an uncharitable mood I am posting instead a picture of Noel’s dog Bobby whom I had to dog-sit while he and Richard were out earning A points without me.
No A's for Anna or Bobby                                    but master-points earned at Matamata 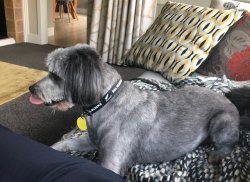 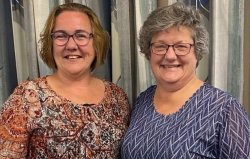 Matamata Junior Pairs was won by Helen Smith and Karen Deane from Te Awamutu. There was a great turnout of 15 tables. 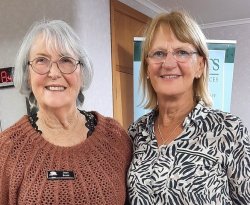 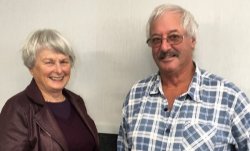 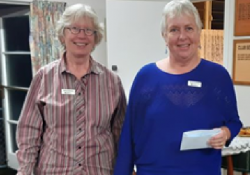 The decision was made this year to run team trials for the Open, Senior and Women and have a Swiss Pairs for the Intermediates.

The Women’s team was preselected due to having just the one strong team enter and the Seniors and Open ended up in a head-to-head duel over one day of play.

It was pretty much one way traffic in the head-to-heads with the victors (and our IP representatives) being:

Women:   Jenna and Christine Gibbons; Karen Martelletti and Kate Terry (with an enforced change having to be made in the Women's team) 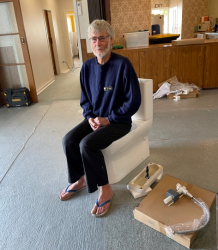 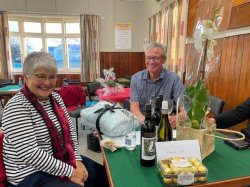 Nick Whitten testing the new          Lynette Morgan and Ian Bond not only
Te Aroha toilets with still a bit          scored well at the Putaruru event (coming 3rd)
of work to be done only 2 days       but they balso seemed to score most of the
before the Waikato Area Pairs        raffles as well.
event at the club. 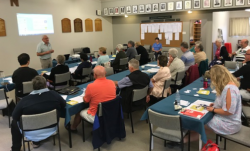 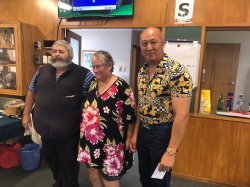 Another great directors' seminar     Back in March, that was Gary Foidl
run by Allan Joseph in April at        and Yuzhong Chen with Judith Howard
Rotorua with 20 budding club          presenting them their prizes.
directors attending.