Daily Bridge in New Zealand from the South Island Pairs

It was mainly North Island players who were successful in the South Island Pairs held over the past weekend in Blenheim. The winners, Brian Mace and Tom Jacob, took the lead midway through the morning session of the barometered final and never loosened their grip on that position. There were 18 pairs in each of the final and Plate and a further 16 pairs in the Consolation. The top pairs at the end of the final were: 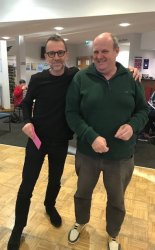 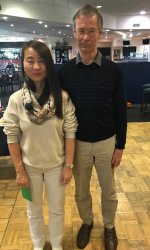 The winners of the Plate were Rebecca Osborne and Jana Bott from Jane and John Skipper and Clair Miao and Wayne Burrows. Consolation winners were Fuxia Wen and Pat D’Arcy from Pam Whitehead and Stuart Grant and Wendy Coburn and Glenys Tyler.

The weekend featured a large number of slam and freaky hands and the problem we left you with yesterday fell into both categories.

Take a look and see what you would bid next and also decide whether you are going to break a cardinal rule of bridge.

What’s the rule and are you going to break it?

Three of the top four pairs in the final all had this or a similar bidding problem. We will see how they coped shortly. Firstly, though, to the Panel. There was the "softly softly" approach.

: Not out of caution, but because this auction is far from over. We might make anything from 10-13 tricks, but it looks as if E/W may have a very cheap save. So, I want to sound as if I may be saving. Perhaps the auction won’t make my efforts convincing, but it can do no harm to try. Potentially, playing a small slam, likely doubled, will be a lot more profitable than defending 6

x. If I wanted to go all out, I might try 5NT immediately (grand slam force), reaching 7

opposite AKxxxxx, but even then the play might be awkward on a diamond lead. Given the variable quality of a first seat green pre-empt, it’s in any event unwise to assume too much.”

: unimaginative, I know. It is tempting to bid a direct 6

but partner does not guarantee AK when pre-empting and the club slam may have no play on a diamond lead. If East bids 4

That sequence means that partner, in the unlikely event of having a partial fit in hearts (stranger things have happened), can show that support by bidding 5

and hope that partner holds the ace of his suit. If partner passes 5

and our opponents bid to 5

, I don’t know what I will do; defend probably.

That just sounds a bit too “softly”. What are your partner’s first in hand not vulnerable pre-empts like?

: I don’t see much advantage in rushing things particularly when I think it is probably more likely to be our hand than theirs.  Clearly East is going to bid 4

if able and likely 5

, and when the bidding comes back to me at 4

if able, and if partner can bid 5

.   I expect we have a club loser as my partners don’t have AK to 7 clubs very often for a 3

bid. So, on a diamond lead, we will be struggling to make 5

even. Often the hand will play better in hearts with many saying “don’t put down 8 card suits as dummy.”

Martin Reid take note. Your pre-empts do not seem to be that good!

Not following Peter’s saying about the 8- card suit is:

from the opponents.  “How good is my partner's pre-empt first seat not vulnerable” I'm asking myself too?

makes it harder for them to bid 6

gives them clarity around two suits.  Secondly, if partner has some fabulous club holding, they may be able to bid 7

: It could make. It could be a save. It could push them overboard. Even if not, I doubt we can buy it any lower or get to a position where I would be happy choosing to defend 5

AKxxxxx, we could be cold for 7

and yet equally on those cards 7

might come in. We are playing Pairs and a lot of people will aim to play in hearts but the 7/3 fit in

’s may well be better.

for the superior score when we can make just 6

is on but not bid. A little hard to bid constructively after a pre-empt but the North hand is very attractive after that first in hand pre-empt. At Teams I’d likely bid 6

. In either case a diamond lead appears the most threatening.”

So, boots and all and, you hope, no further bidding or just bidding slowly first of all to let the opponents get their spade bidding out of their system and maybe, you are “forced” to bid slam. It is time to see all four hands and how our top pairs coped.

East/ West would not go away very quietly! Well, it was not quite that bidding after Kate Davies opened 3

. West showed their two suits with a 4

to end the bidding. Grand slam missed by John and Kate but nearly all the match-points gained.

. Graeme took the fast route to 6

but could only now double East’s 6

as he could not underwrite a grand. On reflection, he thought a grand-slam forcing 5NT might have worked better as over 6

, Ian would just have to bid 7

. Graeme, a “heart” man, would then have converted to 7

….and East probably to 7

So, here’s the way to win the South Island Pairs, as shown by Brian “softly, softly, softly” Mace and Tom Jacob:

bid must have been music to Brian’s ears. I asked Brian whether Tom’s pre-empts are always that good and got a resounding “no” as the answer. However, there was an inference that Tom did have a sound pre-empt when he bid 5

before his partner had a chance to take action over 4

Ultimately, Brian thought their side was not going to get very rich from doubling 6

and so took the push once more.

The opposition had indeed run out of spade bids allowing Tom to put down perhaps the best pre-empt he has ever held. (With

AKQxxxx there is another bid..see below). Even Brian must have forced a small smile at the sight of dummy!

The standard opening bid for AKQ to 7 clubs and no ace or king outside is a Gambling 3NT opening. Now, whether he took a calculated extra gamble or perhaps miscounted (let us say very charitably the former) but Christchurch’s Tony Quinlivan did open 3NT on the South cards. You try stopping his partner, Sam Gurney, after that. They reached the club grand slam with Sam’s side-suit more than making up for the club Tony did not have.

So, the rule we asked whether you were prepared to break was the one where we say you should never make a good-looking 8-card suit a side-suit in dummy. It seems strange to do so when the suit is a major and the game is Pairs.

For the record, only three pairs reached grand-slam, one each in hearts and clubs while the third was the excellent 7

sacrifice. 9 North-Souths were allowed to play in a small heart or club slam, twice doubled. 6

was played four times by West, three times doubled while the remaining 10 tables played clubs or spades at the game level, mainly 5

just one down. Good fun, or not so good depending on which side of the result you were.

We will feature some more hands from this event over the next few days but first:

And in keeping with today’s hand, more pre-emption at a high level. However, we have a play problem for you:

7 which East wins with