The Akaroa tournament is always booked out early. Six ladies come down every year from Wellington on the Thursday, and fly back on Monday. Several car-loads come up from Timaru and Ashburton and stay an extra day as well. This year it was two pairs from South Canterbury who took out the major places.

Percentages over 60 for the day were: Morning; James Lidell/Courtenay Wilkinson 62.8, and Jill Lockett/ Giles Hancock 60.5

In the afternoon John Fechney/Michael Holdaway scored 65.4 to seal their victory for the tournament. But it was Anne Simpson and Lyn Mould who topped the percentages for the day with an impressive 65.7

Once again, a significant number of North Island players ventured south. We can only assume that Covid is the propelling factor in sending more people tripping around the country. The winners came from the length of the North Island, from KeriKeri to Wellington. 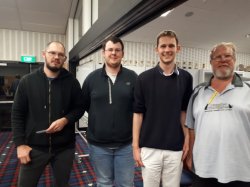 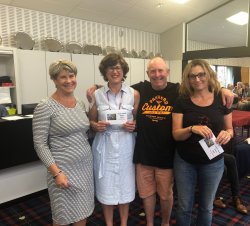 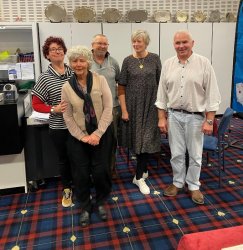 Eight teams contested the Intermediate teams, which ensured no bye fragmented the day. Before the last round was started, Jo Hampton’s team, from five good wins had such a lead that they couldn’t be overtaken. In the final round, the Croy team were equal to the task of giving them a good challenge and actually won the match narrowly. This was enough to ensure 2nd, not too far ahead of the Solomon team.

There was a fine "double" with Bill Humphrey-Paul Carson winning the Open Pairs with their team-mates, Jack James and Jeremy Fraser-Hoskin 3rd. Blair Fisher and Russell Wilson were sandwiched between them in 2nd place.

Margaret Frazer/Helen Gardner topped the morning session with 64, 4% clear of the field, but this was eclipsed in the afternoon by Helen Bremner and Judy Parkinson who blitzed the field with a grand 68.5% to "steal" a win on the day.

Prior to this event Neville Newburn emailed to say he could report on this event, and I was very pleased to accept his offer. He was rewarded with the success that is outlined below!

"It was held in Ashburton recently on a cold wintry day (yes we got across the bridge). This event comprises teams from all clubs in the region (Ashburton, Geraldine, Temuku, Timaru and Waimate, with Oamaru invited to make an even number). The event is played in three grades with an overall winner.

Director John McKenzie certainly had his work cut out and may have benefited from some assistance. He did very well in the circumstances.

There is an old golf saying “Beware of the man with the shortest drive” and this might apply, figuratively speaking, to one of the smaller clubs around when Temuka emerged as the winners overall by just 3.78VPs. Home club Asburton finished 2nd. Situated north of Timaru and averaging only around 8 tables each night, Temuka showed that the 'little guys' can have their day in the sun as well. President Penny Farmer had a very wide smile as she made the speech. 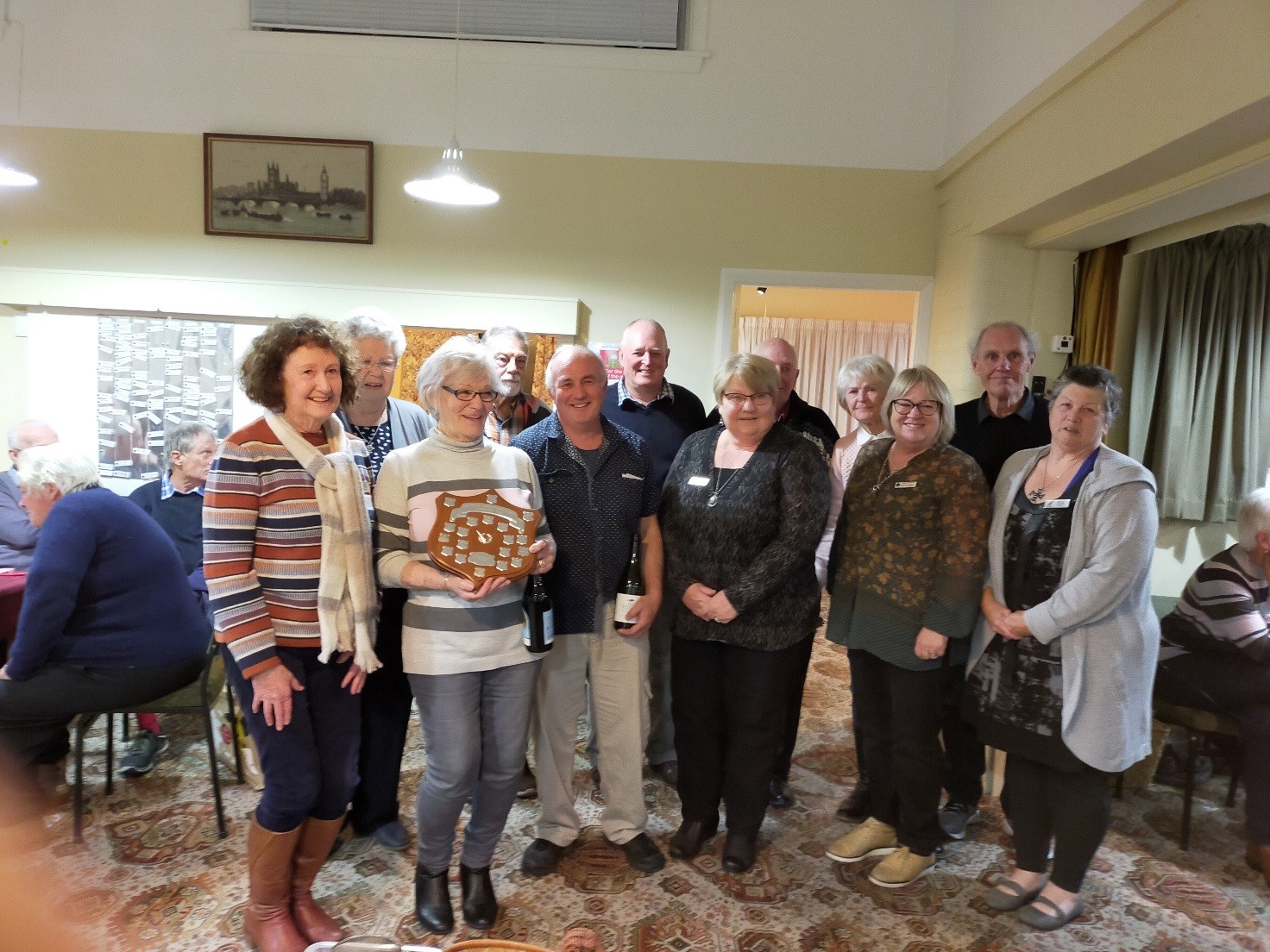 In the Junior section Ashburton (Janine Havis, Paul Leadley, Jason Vannini, Alan Wright) led at the halfway mark and held on to win by 3VPs over Waimate.

The Intermediate section, was won by Timaru and Canterbury representatives (Annemarie Pavletich, Cath Preen, Grant Patterson, Wendy Taggart) but it was a closely run affair. Needing to win by at least 12 VPs on the last match, the team managed 18VPs to win overall, with Ashburton finishing second 8VPs behind.

This hand produced a number of results and some of them quite vital. It occurred late in the final set.

In the senior section, those who sacrificed in clubs escaped with a 500 penalty which was good because the first 5 tricks can be taken by the defence. Most players in clubs in the other sections suffered an 800 penalty. At one table, declarer in 4♠, after finessing ♦10 on a diamond lead, and ruffing a heart, and needing to get back to his hand to ruff another, got quite a shock, when fearing a diamond ruff by South, trumped a club with the ♠4 only to be over-ruffed and held to 10 tricks (much jollity). Only two players made 12 tricks in spades and no pair bid the slam (easy double dummy)." 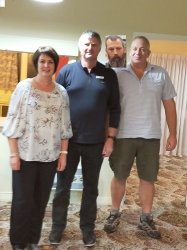 Director Craig McMillan, the club President Lorraine Proffitt and a willing bunch of helpers once again ensured the success of this popular tournament.

The relatively new partnership of Liz Fitzgerald and John Kruiniger, having come second in two earlier tournaments, pulled off first in this tournament by scoring the top percentage for the day of 64% and winning the Spades section. Hearts was won by Andrew Purves and Marty Holman, Diamonds by Jenny Shore and Liz Duke and Clubs by Jim Dawson and Sally Jeffcott. 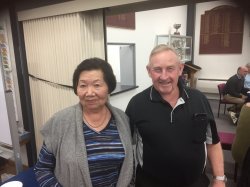 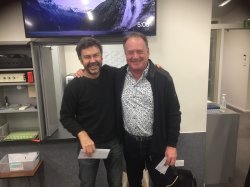 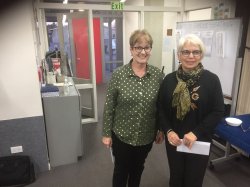 Liz and Jenny did enough to actually finished 5th in the overall classifications, with a 2nd their way in the morning and a 3rd in the afternoon. Special congratulations to these two.

It was fitting that most of the contenders for the title met in the last round. Lesley Andrew and Kay  Nicholas won their last match 12/8, but Dorothy Bain and Jim Burford won 13/7 and this was just enough to slip them into first place for the day.

It was lovely to see the quiet pleasure of Dorothy Bain and Jim Burford when they realised they had clinched first place. Jim said it was the first time he had won in Timaru! 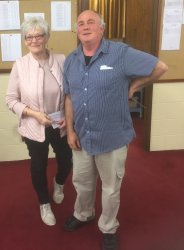