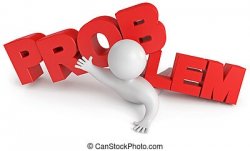 Love it or hate it (and there are many in both camps), the Multi 2D can cause problems for all four players at the table. One such problem is that there is sometimes only one player at the table who knows for sure which suit the 2♦ opener has when it is a Weak 2 in a major. Many a time, the opposition have landed to play in that suit with disastrous consequences. That should not happen in today’s deal…but there are other issues as well:

2♦ was either a Weak 2 in a major or a strong 20-22 balanced hand. When South doubled, it became the former.

The “what now” is hampered by the fact that we do not know which suit East holds. Spades is the favourite though there is no guarantee. If it is spades, we have no hold there for the likely 3NT contract.

If we now bid a major, is it showing a second suit (and why not?) or showing a hold (which we would like 3♥ to mean now) or asking for a hold (3♠ perhaps)? Should we choose a major, let’s hope partner is on the same wave-length.

Nigel Kearney “3♥: Defending against Multi is hard without good agreements. Their suit is unknown so there is no cue bid. I would like to bid 3♥ showing a stopper but on this hand, I don't mind if partner raises it.”

Peter Newell “3♥: Looks like we should be aiming for 3NT in the first instance and likely better from partner’s side and we may have a spade problem. So, I’ll bid 3♥ showing values/length. It is slightly ambiguous as it could be a 4-card suit but partner should be attuned to the fact that 3NT is our most likely game.  I expect partner will bid 3NT with a spade stop on many hands, and can temporise with 3♠ with uncertainty or bid 4♣ with some club support and an unsuitable hand for 3NT.”
Calling Martin Reid.. do you agree? There are those who do not like our Multi defence:

Michael Cornell “3♥: Can’t say I like the system. I play x as take-out of spades and 2♥ take-out of hearts which is much more useful. (much better definition)

Anyway, I bid 3♥ showing a hold there and angling for 3NT. I have already shown a fair hand with club suit so no need to do anymore if partner does bid 3NT.”

Stephen Blackstock “3♥: for now. Below 3NT, we should be bidding the suit we can stop – after 3♣-3♦ we are into stopper mode. I am presuming 3♣ is forcing to game.

Clearly double as a random strong hand isn’t the most efficient method available. Effectively, it mostly forces South to begin shape description at the three level.”

It is a good point that we have created a game-force situation by bidding 3♣, free bid opposite a 16+ hand. Also, if we had four hearts and five clubs, we had the option of passing 2♥ and then making a take-out double of 2♠, if able. Thus, 3♥ now does tend to look like a stop rather than a suit.

Showing our heart-hold rather differently is:

Kris Wooles “3NT: hopefully conveying I stop hearts (played from the North seat) and have a decent enough hand without promising a spade stop. It is clearly desirable to play game in NT where possible and I can’t see me bidding anything else in practice while hoping partner is on the same wavelength.”

Hopefully, Kris, you are playing with Michael Ware:

Michael Ware “3NT: It seems obvious (unanimous maybe?). Even though partner has shown a strong hand with diamonds, I have already shown some values, do not have primary diamond support, and have a slow heart stopper.

And an even slower spade hold! Bruce has “his eyes open” and cannot see a spade hold:

Bruce Anderson “4♦: I could close my eyes and bid 3NT given that partner has shown a strong hand with a very good diamond suit. But unless West is unhinged, they will fit one or both majors So, it is possible we are off the spade suit. 3♠ would be ambiguous and could be read as a suit. I have bid 3♣ freely; if partner has something like ♠ x ♥AKxx ♦AKQxxx ♣Qx they are going to bid game at least.

As stated previously, they are always now going to game in which case 4♦ might seem more like a slam try. However, we will see that along with the rest of the Panel (let’s say that our two 3NTers are on the same wave-length regarding their spade hold), Bruce is heading towards our making game.

The 3♥ bidders will not get 3NT from their partner. South might try 3♠, now looking for a spade hold. When we cannot oblige, the partnership should drift towards our best (6-2)fit. These were the four hands.

3NT especially by North should fail as long as East does not get too creative on the opening lead. Meanwhile, 5♦ is solid and other game contracts less so.

So, your partner’s weak 2’s are not always that good? Some good points arose above about our defence to the Multi, whether or not you like the approach. West did cause some identity problems of East’s suit by not bidding 2♠ first time… but opposite a weak 2 in spades, did West even want to try to be declarer?

Hopefully, your action would not have given East the opportunity to lead 6 rounds of their own suit from the top! Interestingly, when the deal did occur, in club bridge, an uninterrupted row of diamond partials occurred. Disaster avoided but job incomplete.

The game is Swiss Pairs and you have a good hand, especially after partner’s action. What now? 4NT is “two places to play.”