We start the review with some interesting reflections by a new player to our game on her first tournament, Palmeraston North’s Suzanne Carpenter. She starts with a quote:

“Admitting errors clears the score and proves you wiser than before.”

“I have been learning bridge for 18 months.  I was encouraged and cajoled into entering my first tournament on 25th March 2021.   I asked a fellow classmate if she would partner with me.  We entered online, paid, and then doubts set in.  All week I revised and talked over the scoring and responding and over calling rules in my head. Any spare minutes I practised against the robots on my phone. Such dedication must surely be rewarded.

Saturday was a sunny day. We entered the hall at 9.15am and exited at about 4.30pm. Everyone was friendly and there were heaps of others spending their sunny Saturday inside playing bridge. I was not a loner; I was in esteemed company. LOL.

The first game was a nervous play and a relief it was over. Concentration at a peak. We talked a little with others at the table if we finished early and conversations began. Remembering play was ok and we survived the morning.

At lunch we met more people and a I started to feel a bit tired. My concentration began to waver.  I looked at my hand and supposedly wrote 2S for a 5-card major opening with 12 points. Oops, I looked at the pad when my partner was responding …. I had written 2C… Double oops!  She thought I had a great hand. Too late to call the Director. Suck it up, cupcake. Carry on, all the way DOWN!

Several other rookie mistakes followed, missing a transfer response to my 1NT and choosing the literal suit … oops. Then we won a couple of game scores … whoopee. Highs of defending and taking them down or making our contract … then the lows as we became greedy in our bids and went down. Concentrating for that length of time was a test I did not pass fully this time. Definitely room for improvement.

If admitting my errors makes me wise; I am wiser than I was.

Overall, I enjoyed the tournament and the people and will definitely enter next time and encourage other newbies to do so too.

Thanks to the organisers and workers in the background that made the day go so smoothly.”

Suzanne tells me she took up bridge to keep her mind active and to meet people socially. Thanks for the insight, Suzanne. I am sure you will be back for more (and the whoopees will start exceeding the oops!).

A Tribute to Evelyn

The bridge world was shocked to hear of the unexpected death of Evelyn Hurley on the 7th of June.  Evelyn and Bob Hurley have been a highly successful husband/wife pairing for more than 40 years and will be well known to almost every tournament player in the land and especially throughout the Central Districts region. Evelyn and Bob were married in Palmerston North 48 years ago. They were fine examples of how spouses should treat each other when playing together. Their communication at the table was never above a whisper and neither of them engaged in answering back.

Evelyn was heavily involved in preparations for the Palmerston North club’s 75th Anniversary held on May 30th. She was a great servant and supporter of her club and did it all with quiet efficiency and dependability. Along with so many others, I will miss Evelyn’s welcoming and endearing smile and her graciousness toward her opponents. To Bob and the family, sincere condolences are extended on behalf of the bridge community at large. Rest In Peace, Evelyn Hurley, 1944-2021.

The Palmerston North bridge club was established in 1946 and celebrated its 75th birthday on 30th May 2021.

Past Presidents and Life Members were honoured with a roll call and many were present for the occasion.

An attractive printed programme was circulated and listed the order of happenings for the full day, a “Meet and Greet” time, a Champagne lunch, two sessions of No Fear Bridge with a Pot Luck Dinner, Celebrity Speaker etc in between. 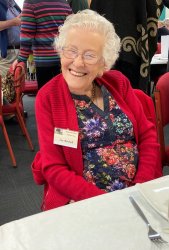 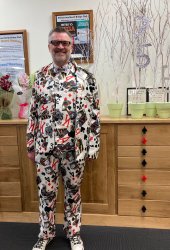 42 pairs took part in the Anniversary Pairs. The winners N/S were Liz Burrows and Morgan Booker. Fittingly, the E/W winners were Scott Smith and Evelyn Hurley.  Scott featured as the Celebrity Speaker and gave a light-hearted address about his secondary school years when he would often wag school to play bridge at the club. (It’s called multi-tasking!). Scott and Evelyn have had a long association in the world of bridge and it is still a shock to reflect on the fact that Evelyn passed away just 8 days after their win at the Anniversary Pairs. Scott paid a loving tribute to Evelyn at her funeral.

Everyone who took part in the celebration was a VIP but a very special couple who attended were Bev and Allan Morris. Allan is the current Chairman of N.Z. Bridge. He made an entertaining and informative speech and added a much pleasantness to the formalities of the day. On behalf of the Board he presented to the club an impressive plaque to commemorate the 75th Anniversary. 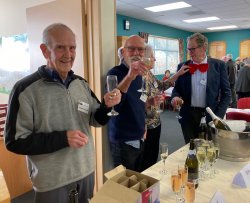 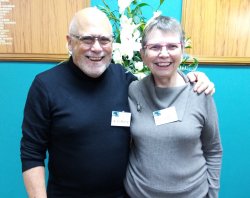 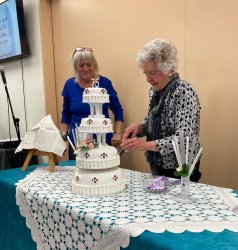 The evening session was called the Jubilee Retro Pairs. Everything was from yesterday-year. The Director (Lorraine) was dressed as a croupier from the Al Capone era; the boards were carved from unwashed kauri dragged from the Northland gum fields; the cards were borrowed from the local kindergarten; pens were replaced with pencils that hadn’t seen a sharpener since the club was formed in 1946 and the travelling score sheets were cut from the original wallpaper.

None of this affected Liz Burrows/Morgan Booker who racked up their second success of the day. The E/W winners were John Seator and Ken Bateman.

Bridge club anniversary functions are special occasions that deserve the support of all members because they are good fun and recognise the work and commitment contributed by members past. I totally recommend them.

After the cancellation of the 2020 Hawke’s Bay Congress last year, it was pleasing to see the high attendances in all grades for this year’s competition.  A thanks to all the sponsors and a special mention of the generous sponsorship provided by George Masters Motors. Thank you, George. Your support is highly valued.

Competition for Novice players has always been a feature of this Congress and congratulations go to Sonia Heeney, Helen Rowe, Glenys Ross and Jocelyn McClelland who won the Novice Inter-Club Teams. 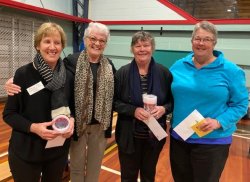 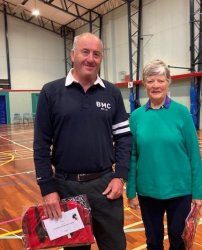 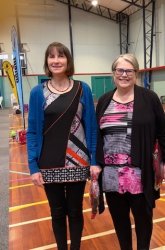 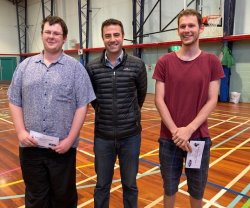 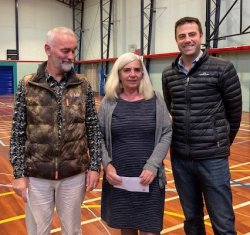 Jack James and Jeremy Fraser-Hoskin     Michael and Liz Wilcox and again
with George Masters in his role as sponsor    with George, the sponsor

High numbers continue to enter for Swiss Pairs tournaments and 20 tables were in play for this event held on July 11th.

The format was for eight 8-board matches. Winners were the Hawkes Bay’s Peter Ramsey and Noel Woodhall. 2nd placing went to Wellington’s Sandy McKirdy/Graham Stronach with Wanganui stalwarts Robyn and Don Nightingale a close 3rd.

Sponsors for the event were Kowhainui Home and Retirement Village, Wanganui. 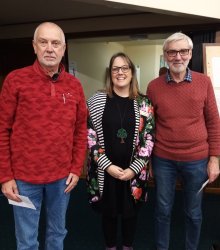 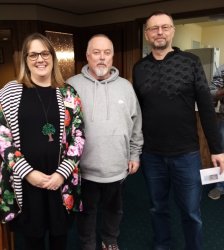 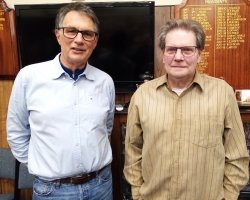 A remarkable performance in this event was the result turned in by the Wanganui Junior pairing of John Holt and John Dodds. Out of 40 pairs, they  finished in 9th place, 20 vps behind Peter and Noel, but well ahead of a good number of Grand Masters. Congratulations to both.

The annual charity tournament held at the Feilding club is always

a full house with 15 tables. This year’s event was dominated by the Palmerston North club. Ken Bateman/Jan Whyte had a comfortable win from Zheng Zhang/Morgan Booker with Tony Clear/Laura Griffin in 3rd place. A special mention is made of the young couple who finished in 4th place. Jaedyn Eade and Elizabeth Gibson are very junior players and were entering their debut tournament. A splendid effort by both. Congratulations. 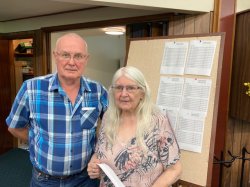 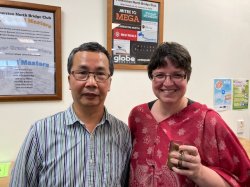 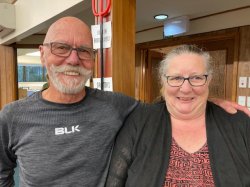 17 tables was also a full house for the Levin Open held on July 18th.

Graham Stronach/Sandy McKirdy are a Wellington pair who have built up an impressive record in regional tournaments. A 58 followed by a 68% gave them a win over the Ker brothers with Graham Cheater/Mindy Wu a very close 3rd.

Taihape has an annual tournament and this year 20 pairs took part.

On the same day as the Taihape tournament (May 23rd), Hawera held their annual charity day for St Mary’s Church. 17 tables were in play (another full house) and husband/wife pairing of Lynette and David O’Shaughnessy had a big win helped by an impressive 71% in session 2. Joan Smith and Kevin Upson were a clear second with Anita Thirtle/George MacLachlan third.

The annual 3-way inter-club teams competition between Palmerston North, Hawera and Wanganui was held recently and resulted in a win for Wanganui. An initial mis-count gave the match to Palmerston North but an overnight re-count picked up the flawed result and confirmed that in fact the Wanganui team were the victors. Palmerston North were 2nd with Hawera 3rd.

Although always the hosts, Wanganui’s successes in this tri-series are notably infrequent and this year’s win was the first for about 10 years.

The silverware is now in the display cabinet and a celebratory pot luck dinner has been arranged for the end of July. A photo of the smiling team will be included in the next round-up.

For the record, the scores were: