For some time, I have been aware that there are two people at least in the Canterbury region approaching 100 and were still making it to their club to play bridge.

So, I was disappointed when recently a club member, Garry Thompson, stood up to announce that Robert Long had decided at the tender age of 98 to retire from coming out to play bridge on a Thursday night. He then gave a rather nice summary of Robert’s association with the club and a synopsis of his life.

Robert had been a member of the Christchurch club for over 50 years.  Like myself, he had been a Mathematics teacher throughout his professional life and shared a strong interest in tramping. He was also a very good tennis player.

Also, for at least the 15 years that I have belonged to the club, Garry Thompson has been Robert’s Thursday night partner; in fact, Garry told me today that he had partnered Robert for 23 years. Garry had made it easy for Robert, in his failing health, to get to the club, and get around the room as an East-West pair. For this Garry needs to be commended as a good sort in the club.

Crockfords 8B  18th July. The four top percentages for the day were Richard Lapthorne/Neil Hawkins 68%, Pam Tibble/Margaret Burgess 65%, Max Robb/Bill Mecchia 63% and Tony Quinlivan/Sam Gurney 60%. Interestingly this order was reflected in the overall results for the day. 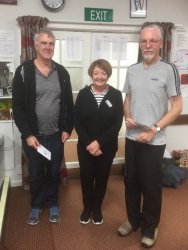 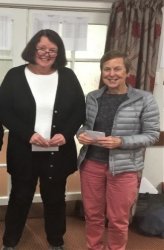 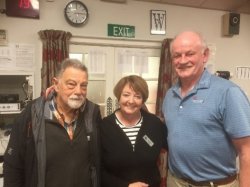 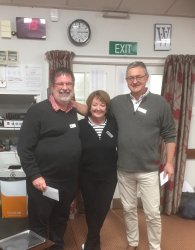 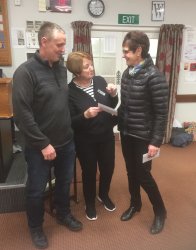 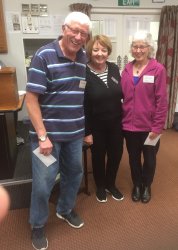 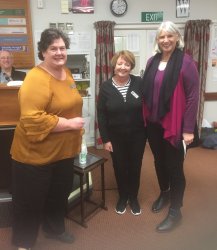 I thought that 26 teams was an impressive number of entries, but Tim Schumacher told us that just the week before they had 36 teams in the far reaches of Northland. In fact, 6 players had flown and driven up from Christchurch.

The Alabaster and Skipper teams were neck and neck going into the last round. It was fitting that the strongest two teams would play each other for the title, and it was the Alabaster team that won the day.

Margaret and Pam gave able support to their more experienced team mates Jenny and Shirley to come 3rd. The Newton team’s only loss was to the winning team in round 4.

I wasn’t the only person who appreciated the lovely gesture of two grandmasters Mehboob Chiba and Tina McVeigh to team up with two up and coming Intermediate players, Caroline Caseley and Jo Hampton. I can imagine their excitement when they scored up at the end of each round and found they had won another match. Collectively their efforts gave them an 80% success rate for the day, and number 1 spot in this section. This was a big day for Caroline and Jo. I looked up their master points to discover that one of them had more than doubled her A point total!

Max Robb/Chris Bras and Pamela Glynn/Julian Glynn punched above their weight to come in 2nd in the restricted and 5th overall.

Fiona, Brigit, Rex and Denise had to show fortitude in braving the rigors of an Open competition, and we hope to see them arriving to sample more tournament bridge.

Of particular interest was that a car load of bridge players arrived from the deep south. Greg Buzzard, Harry Shepherd, and Donna and Kevin Skoropada arrived from Invercargill and would not have been impressed that it snowed on them for much of their stay!

Snow is falling at Geraldine 8B

In the second session it was David Sewell/Debbie Seddon-Sewell who headed the field with 65%.

How to keep Up to Time!

Recently, on a Friday morning bridge session, I had secured a contract of 4

. Anna, sitting South, couldn’t make up her mind on which card to lead and actually said words to that effect.

I asked if I could help. Quizzically she glanced at me and jokingly I leant forward to draw a card from her hand. She opened her hand a bit more as if I was doing her a favour. As I pulled the

2 forth, my partner Pam was already laying out dummy. Assessing dummy, and before the

When we arrived back at Anna’s table two weeks later, she said she had had a good chuckle each time she remembered the moment.