Well, what can you be thinking about? The opponents have conducted a long-winded auction and have reached their final destination. If you are following the auction, you will find that you are not on lead. So, there’s nothing much to think about just yet, is there?

You might have been asleep during the auction…hopefully not, as you will be taking part in the defence!

set trumps, looking for slam. A club cue-bid and North was using key-card. South showed 2 without

Well, you might wonder what your partner is going to lead? What would you like them to lead? A diamond would be nice. Maybe you could score your king and you will certainly make the

A. So, thinking nice thoughts, how can you encourage your partner with very little strength to lead a diamond, the first bid suit by dummy?

Why, a Lightner Double of the slam. That’s what it traditionally asks for, certainly not the unbid suit and certainly not a trump. There’s not much to lose. The auction is not yet over: it’s not too late!

and await partner’s lead…but it does not come. Why? One of the opponents, South, decided they could have another bid, 6NT! Suddenly, your partner could not find the wrong lead. The pressure was back on you because you were on lead! The good news was that you were not going to find the wrong lead. Why? Because there was no good lead! Ouch. These were the four hands:

? In such situations, they might just opt for the normal safety of a trump lead: safe, unspectacular and wrong. It had to be a diamond to test the declarer. Any 4-3 club break sees the

J discarded on the third round of clubs.

That was not the case here. North will still survive as long as they cash

AJ after taking the

A at trick 1, play a spade to the jack, then

K which West ruffs low. Disappointment for North but there is still one more chance. Cross back to

Q and play the fourth round of clubs…and West has to ruff with the ace or not at all. All North needs now is a 3-2 trump break…and they are home, +980.

Conjecture, as they ran to perhaps where they should have been, 6NT, which was a better contract needing either the diamond finesse or a normal heart break. It seems when making a Lightner Double, you not only think your request will beat the slam they are in but the one they may run to as well, which often will be 6NT. That, perhaps, is why West should have waited and hoped that their partner might lead their doubleton, a lead that was not quite good enough. 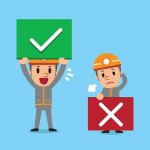 right result, but for which side?


Lightner doubles create interest and excitement but rather too often create the right result for the wrong side, declarer’s!

I do not want to tax you too much on a Monday (am not really sure why not!) but a rather gentle question for you to worry about overnight: