Does Nought mean “No bid”? for less experienced players and others.

The following hand intrigued me because when it was held by some players, they chose to pass at the first opportunity because they were “pointless”.  For me, there was no necessarily winning option but passing when these players did felt wrong. So, I asked the Panel how they would treat the following hand:

Few would argue against your initial pass or your 2

Traditionally, our partner has shown 23-24 balanced with 2NT. For many these days, with a different bid catering for a balanced 23 count, this sequence can be treated as 24+ hcp and thus be game-forcing: a better way than jumping to 3NT with the once a year 25 count or once a decade 30 count! (if you have not held a 30 count for about 9 years, you know it will be coming soon!).

Our Panel were inclined to test the air with a transfer to hearts:

. It doesn’t have to be right on the layout, but sight unseen is the normal guess. Opposite a super accept, 4

could well make. Even opposite a doubleton heart, my hand will provide more tricks than it will in no trumps, and there will be entries to play towards the strong hand too."

: A transfer certainly looks right and at matchpoints I would pass 3

. When partner has three hearts, I expect he'll make 10 tricks a bit more than half the time, but the 3

contract will be plenty when he has only a doubleton heart.”
Andy Braithwaite “3

: I would transfer to hearts and pass if partner bids 3

.  Rule 1 is never play in 2NT if an alternative is available!”
Bruce Anderson “3

: a transfer, and then passing 3

. That may be wrong but I am not passing 2NT, which is likely to be an inferior contract when partner has 3 or 4 hearts. Transferring does not preclude partner bidding game by way of a super-accept if he/she has four hearts and AK AK A outside the trump suit."

: It seems unlikely that 2NT is the best contract, and I think often NT will be the wrong denomination. So, I’m going to stretch by starting with a transfer to hearts.  If partner accepts the transfer, I’ll bid 4

natural. We certainly risk getting too high but if partner fits one of my red suits, game is likely.

If partner doesn’t fit my suits, I think it unlikely that 2NT is going to be great, but yes, it is a lot lower than 4

And finally, the super optimist:

: I will simply transfer to 3

and bid 4 if that is all partner bids as we play accepting a transfer in a 23+ hand shows 3+ hearts.

Partner has an average of nearly 6 HCP in every suit so is a big favourite to hold some big red cards as we are holding all the small ones!

Whilst he could go close to making 2NT, unless he has a source of tricks, he is no certainty and the prospect of any more than 120 is slim.

On the other hand, if we play in a red suit, my hand will definitely take some tricks and we may even be able to take a finesse or two.

I am an optimist. I think partner has upgraded

AKx. Not only will we make 6 but we will bid it!

A couple of interesting interpretations of what 3NT means after the transfer. A united Panel in bidding but somewhat disunited in the prospects after the transfer. So, let’s see if Michael is good enough to make slam on the actual hands. No upgrade but a decent 24 count opposite. Would you make slam in hearts with these cards after the lead of

would be wonderful though if you start playing trumps too early, you will need to start shortening dummy’s trumps and may start running perilously low on hearts very quickly. So, maybe win and play

Q. If West ducks, you will have a chance of playing trumps for just one loser (low heart from hand at trick 3) as these were the four hands:

Off course, to make 12 tricks legitimately, you need to play

A and ruff a spade and play

9 from dummy, playing low from hand if East does not cover. If they do and West wins and plays

J, you win, ruff another spade and finesse against East’s other heart honour…oh and then drop the singleton 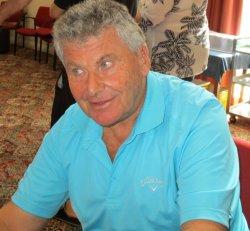 Wake up, Michael, I am sure you made 11 tricks in hearts, still a decent score with some North players wishing they had bid over 2NT.

The Bidding’s not yet over!

It’s short and suddenly not very sweet! What’s going on? What are you going to do, bid or lead? It’s Pairs and our opponents are vulnerable.