A short auction to slam by the opponents. You have nearly your share of high card points and your partner is also “alive” on the first round of the bidding. What’s going on? The vulnerability is not in your favour. Are you going to bid or lead and if the latter, what? We are playing Pairs.

is anything but “standard”!

Let’s hear from the Panel:

K: We can't bid at the seven level with so few controls. If we guessed wrong, well done to them for making it difficult. A trump lead might be right if partner has clubs locked up but

The same views are expressed by Pam Livingston.

7: I want to lead a trump in case there is some freakish distribution which sees a trump lead as necessary to stop 6

making on a cross ruff.

It would be crazy but not insane to bid. West could be on six spades and nothing else, meaning it is likely we can make a grand, so that he/she is pre-empting the bidding violently on, say,

AKQx, but perhaps I am becoming an optimist and a dreamer.

As is often the case, the style of one’s opponent is unknown. We do know for sure that West cannot have more than six spades. They could be sacrificing though it is a pretty extreme position to take to presume we can make a grand-slam. Most would bid a little slower in that situation.

Just maybe maybe, they are bidding to make, in which case they have extreme  shape.

must be based on a big 2 suiter in the blacks and so partner is ruffing clubs and hopefully has a spade trick.”

Michael Cornell “I pass and lead a club as I think double is Lightner. If partner was desperate to dive, I think he would bid 6NT. LHO is clearly bidding to make and I have so many good red cards I think he has a big club suit in which partner has a void.”

5: I cannot see any reason to bid. What makes us think we might make a grand slam, or that we have a cheap dive over 6

What is partner’s double? It is either Lightner or partner has enough to beat 6

in his own hand and the opponents are making an advanced sacrifice. If partner has a good hand, he does need 4 first round controls to make 7, plus other stuff…so I’m certainly not banking on that,although possible.

If partner just expects the contract to go down, it may not matter that much what we lead, with clearly the

K being the safest.  If partner’s double is Lightner, they could be void in any of our 4 card suits so bit of a guess.  So, I take the view that what type of hand if partner has a void most worries me as far as potentially make 6

It’s clear if partner were to be void in clubs, the opponents have a huge club fit, and 6

would certainly have chances particularly without a club lead.  If it were a red suit there wouldn’t be many pitches and even if I gave partner a ruff, I might be blowing a trick in that suit.  So, I lead

5 suit preference. If partner doesn’t have a void in clubs or one at all, this could be wrong, but it also may not matter…”

Well-reasoned to the right choice. If you found the club lead, you can sit back and await partner’s second trick. Yet, something starts to worry me. If the club lead is correct, then West has no more than 5 spades. They must therefore have a huge number of clubs and not much in the red suits. Passing and leading a club will not lose you the post mortem but will it win you any match-points?

You only get one chance in your life to make a vulnerable sacrifice against a making non-vulnerable small slam. My opportunity came many years ago (rather too many!). Do we count this as the Panel’s opportunity come and gone?

The answer is “maybe”. What is certain is that partner’s ace did not cash at trick 2 and that the heroic lead of the club earned you no match-points because of the double.

If the world was in slam (which of course it was not), then your one and only chance of such a vulnerable sacrifice depended on the defence to 7

x. Presumably, North would be the declarer. A diamond lead and a ruff followed by

J, overtaken and ruff (“don’t blame me partner if your Weak 2 suit was headed by the 10!”), would net the defence at least 1100. A black suit lead (presumably a spade from East) would be a trick or two less depending on what declarer does about trumps. Yet, if you are brave enough to pull 6

x to the 7 level, your partner will repay you by taking the right view!

which throws the gauntlet back in your court. However, as was hinted earlier this week, the Lightner Double benefited the declaring side yet again. Not that they ever would here, West could pull 6

x to 6NT though they would have to explain how they knew their partner had the top diamond! No pull, no overtrick but a great result for West from an enterprising bid.
great 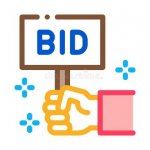 Alas by the opposition!

The player who found it at the table was Whangarei’s Len Dent. Well done, Len.

Let’s see. You have bid to a very reasonable slam. It will only feel reasonable if you make it. Plan the play.

There was no opposition bidding. West leads