How could Stayman become so awkward? You get your response to 2

and on the basis of that, you can either bid or invite game depending on strength, maybe even just choose to play in a major suit at the 2 level.

Then, along came South! They replied to the opposition’s Stayman ask and life got a whole lot harder for the side which used Stayman.

You have an awkward decision. You seem to have too much to pass but not necessarily enough to bid…and if you bid, where are you going to end up? The logical option for a bid is “double” but what does that mean? If you pass, you could be missing a cold 4

in case you were weak.

Bruce Anderson “Double: I am presuming my partner and I are playing Stayman where the great majority of the time I am promising a second bid i.e. I will have 11/12 points and be inviting game if we have a fit, or bidding 2NT if we do not. In fact, on this sequence, where both opponents have passed at their first opportunity to bid and partner has only weak NT hand, it is almost certain I have an invitational hand.

In my view partner should only bid after 3

with both majors, or with four hearts and a maximum weak 1NT, so if I hold 4 spades and have to convert to 3NT that contract may have reasonable chances. Given that partner did not bid over 3

, they should not be bidding after my double of 3

, which must now be for penalties.

I would take issue about North being a “passed hand”. That they chose not to bid over the 1NT might just mean they had around the 10-14 hcp but nothing convenient to say. From West’s point of view, we, East could be running from 1NT with very little.

I prefer this interpretation of the double:

Stephen Blackstock “Pass: Playing IMPs I would pass because game looks a poor prospect, we may not find a making part-score even if we have one, and there is potentially more to lose than we might gain from a penalty double.

However, at Pairs I cannot afford to be so passive: +50 on defence will likely be a poor score. so we must try to find something better. Double cannot be treated as either classical take-out (for example 4441) or 100% penalties: if South is sensible then I cannot have a strong enough trump holding for that message.

Double merely says “partner, what do you think?” West knows I will often be semi-balanced to begin with Stayman and I expect him to pass the double with no strong alternative. More often than not, we will defeat 3

, otherwise it’s just a board! But as I cannot have a trump stack. West now knows I have values and therefore has licence to bid with, say, xx in clubs and a fair chance of a safe landing.”

An action, “values” double seems a better description. The problem with taking action is if we have one major and partner the other, we will almost certainly end up in 3NT and is that really where we want to be?

making so I won’t double. For example, West could have

K and we might only have 3 defensive tricks. Our best spot may be 3

but how to get there? 3NT is way too speculative as we will get a club lead and if South has 6+ clubs and

If you are lucky, you will make that many! Andy has no stomach for that kind of result:

Andy Braithwaite “Pass: Nasty problem and it looks like we are fixed- so I pass and hope to get a plus score as I can’t see a plus by punting 3NT.”

and definitely in the “Pass” camp is:

Michael Cornell “Pass: Not vul at Teams the bid I would have made after 1NT.

When partner opens a weak NT at love all, I think his average HCP is about 12.5 so 2NT is far from safe (everyone knows he can / may have 11).

If he has 13, he will probably bid 3 and our 11 has few redeeming features with no intermediates.

Now the opponents have bid 3

which I suspect will be 1 or 2 off. Our only possible bid is x and I think this severely increases our chances of turning a plus into a minus. Even if we do go plus, this will usually be only marginally better than defending 3

Furthermore, what would we do if partner bids 3

, close to his most likely response?

We would obviously have to bid 3NT and get a club lead through our Axx- it will go down 2 or 3 far more often than it makes and if the overcaller has a good suit, he will even give it the resounding whack that the contract deserves!

A lot of pessimism about our prospects. Yet, even if our partner had four hearts and something like

One more, though, for the penalty double:

Nigel Kearney “Double/Pass: if we have agreed it is penalty, otherwise pass. We had a very marginal invite and now we know suits are not breaking and they have a good lead against NT so I would choose double or pass. We are not certain to defeat it but the double costs eight IMPs if they make and gains two IMPS for down one and five IMPS for down two. There are plenty of lunatics out there so those seem like pretty good odds.” 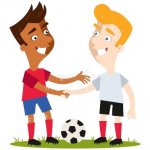 Poor South. Described as a “lunatic”. This South was quite sane and had a sound bid, even for a passed hand:

should be one down as long as the defence do not touch spades …and they should not after a high diamond start. Indeed, if South did take a wrong spade view, they might just finish 2 down.

Kris Wooles was correct about a diamond partial being East-West’s best spot. After the “action double of 3

”, West could bid them but they are more likely to try for the major fit which will see 3NT the end result. After the standard high club lead, and hold up, East will be forced to take their ace and should play out their diamonds. Now, a successful heart finesse will see declarer take 8 tricks in total while an unsuccessful one will see 8 tricks go to the defence! Maybe Michael Cornell would be collecting + 800! In fairness, if declarer places

KQJ and a high spade honour in the South hand, then with South a passed hand, North is a strong favourite to hold the

between today’s hand and tomorrow’s Jan’s Day one. ..or two. One simple bidding sequence and two different West hands:

In both cases, the game is Teams and North-South were playing 5-card majors.