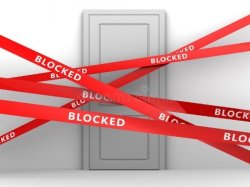 The Blockage: No Way Through.

It happened, except we are not talking about getting through a seemingly closed door but in the play of a bridge hand….and the stakes were high as we were in a small slam! Would we find a way through? Would there be a happy ending? Firstly, plan the play.

North was a little lazy in the auction. They had a mighty good hand when South volunteered th

e North was a little lazy in the auction. They had a mighty good hand when South volunteered their 2

said that (control in diamonds, slam try) and when South co-operated by cue-bidding their

), South should have tried Key Card. (Had South held

Today, though, South had no

Heading down a dark alley

This is what happened. South ruffed the opening lead in dummy, crossed back to hand with a spade to the ace…and played

Q which West covered and again was ruffed low. Then came AK and West discarded a diamond on the second round. Out came the brick wall…or shall we say “the black wall” as all dummy had left was

So, not wishing to touch clubs, South played

Q was played, East produced a red card, the

J. So, there was no alternative now. The club finesse had to be taken!

Staying out of trouble

Unquestionably ruffing at trick 1 was correct. Life was not necessarily straightforward at that point but South could have trodden a better path. They could afford a losing club finesse and probably discard both losing diamonds on clubs or spades. If East had all 4 hearts, a second diamond ruff would not be a good idea.

A K.Had hearts broken 2-2, the contract was cold. Yet, it should have been pretty cold when East held 3 hearts.

Play a spade to the ace to be followed by

If the club finesse lost,  clubs should provide 2 discards or else maybe there was a 3-3 spade break…or

QJ would provide a natural trick if a diamond was played.

T and shut their eyes. When they opened them, the

T was still winning the trick and the slam had been made. We all want good news in 2022, don’t we? South used one of their “get out of jail cards”.

North was relieved that they did not appear to have missed a grand slam. While the opponents only held 12 hcp and West opened the bidding, an opening bid on a 9-count could have happened, given East’s raise to 2

Notice that when the “blockage” occurred, a safer route to 12 tricks was to lay down

A and concede a trick to the

K wherever it was. This line only fails if East started with no clubs.

J could never score a second trick for the defence.

At times, it is not easy to envisage at trick 1 what will happen 6 or 7 tricks later.

It’s all about planning early on. You have probably heard that 2,000 times before. It’s true, though.

It’s a nice bridge players’ wish about hoping “all your finesses work”. Can we add on “especially in slam when you need them?”