Well, you are hoping to beat a contract. That’s you and your partner, co-operating together, without saying a word. It’s all done by the cards you play. So, here you are:

East shows up with a balanced 20-22. West transfers and then raises to game. You lead 2 top hearts and your partner shows an even number of hearts. What now?

Even number means 2 or 4. If our partner has 4 hearts, then declarer has 2 and if we play a third round of hearts, we will give the declarer a ruff and discard situation which does not seem wise.

What other options are there? With declarer having at least 20 hcp and 17 spread between our hand and dummy, there is very little scope for our partner to have much worthwhile in diamonds.

So, back to the drawing-board. South decided that the best chance of a fourth defensive trick, along with the

A to come, was that North had 2 hearts and could over-ruff dummy. How about playing their partner for the

Q? So, without thinking of the consequences, they played

9 from dummy and North indeed played

“Great” thought South….but for one problem. North did not know whether to exit with a diamond or a club…and given the chance for a misguess, they did indeed do just that with these being the 4 hands:

North tried a diamond and East wrapped up 10 tricks very smartly, winning, drawing trumps and discarding West’s club on the

No matter how much South could remonstrate that it might be wiser to exit with a club (maybe the loser that might disappear quicker is the club), the fault was 100%, maybe a greater percentage(! ) , in South’s court.

South alone knew they did not hold

South alone knew that the contract would be defeated if North could over-ruff dummy.

South did not follow one of the basic most important guidelines for the defence… “thinking of our partner” by making the defence as easy as possible for our partner. That’s what a good defender does.

A as an entry. You beat the contract and then hope you beat it by 2 tricks…and that possibility was so unlikely.

So, South should have cashed

A at trick 3 and then tried a third heart. No misguess now. The defence already would have 4 tricks.

Note, that if South plays a low heart at trick 3, the declarer will simply throw away dummy’s club and the ruff will be the defence’s third and last trick.

South was right to try to give their partner a ruff but they did not think through the consequences of their action. Sometimes, you need to give declarer a guess but on other occasions, there is no guess. Be alive to your partner’s possible problems. 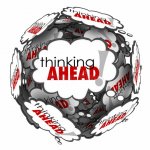 and helping if you can.

A was right on the actual lay-out but also if North had held 4 hearts..no ruff and discard.

Most importantly, make the defence as easy as you can for your partner. Next week, they will do the same for you.

Who is Gambling now?

The "Gambling 3NT” opening bid is almost certain to create a problem for someone at the table…and it is not the opening bidder! They are showing a long solid minor and no ace or king outside their suit.

So, your first decision is whether you pass 3NT or retreat to partner’s minor. With something useful in both majors, you decide to sit it out. However, North’s double prompts South to race off to hearts. What now?