National Rubber down to the last board.

The 2021 National Rubber competition was finally completed on Real Bridge on Saturday afternoon in a very tight match between Wellington’s Anthony Ker and Russell Dive and Christchurch’s Fiona Temple and John Kruiniger. “Down to the wire” or “honours count” are two phrases which come to mind in reviewing this match.

Whatever one thinks of the Real Bridge medium for Rubber, the match had a much bigger audience than had it been played at a live National Congress. However, we anticipate the finals of the 2022 event will be held live at the 2022 National Congress.

Back though to the 2021 final as seen through the eyes of one of the competitors, Anthony Ker.

Firstly, though, a question for you. It is from the Rubber final. South ended in 2

x going 3 down, not vulnerable on the board below. What was the East-West score?

Honours Count…especially when it's tight by Anthony Ker

“In rubber bridge 100 points for honours can be claimed if a player has four of the top five trumps. If they have all five, or all four aces in No Trumps, the bonus is 150 points. Honours featured in three hands of the NZ National Rubber Bridge Final. The first one occurred early in the match, with Fiona and John holding a 70 part-score:

After John opened the bidding, I pre-empted as high as I dared, and Russell was happy to take the save over 5

is a very interesting contract. On the

9 lead, declarer must duck in dummy and win the ace, draw trumps, play hearts from the top dropping the queen, cash the jack, cross to dummy, ruff the last heart and exit with a diamond. If West wins, it Is ruff and discard time and if East wins he will have to lead back up to the

Q or concede a ruff and discard also.

A at trick one, then if West shifts to a spade, declarer can still succeed. Draw trumps cash the hearts, cross to dummy and play the last heart. discarding a spade from hand. West will have to give a ruff and discard and the second spade loser disappears. 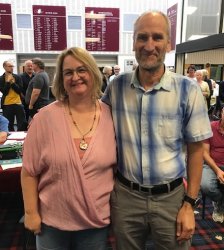 We don't know if John would have played this way, but 200 points seemed like cheap insurance. After a few more fiercely contested hands, we took out the first rubber to lead by 980 after 9 boards. Fiona and John struck back immediately, winning the second rubber in just three deals to effectively level the match after 12 boards. The third rubber swung back and forth. Midway through, Fiona was dealt this beauty:

A rubber bridge player's delight! Her side were soon wrapping up 3NT and the 4 aces was the icing on the cake, giving them an extra 150 points for honours.  Another successful 3NT contract gave John and Fiona a 600 lead after 20 boards. It didn't last long:

opening was Precision, 11-15, and could be short in diamonds, promising at least one 4-card major. John's overcall might not be to everyone's taste. I doubled for take-out, intending to show an invitational hand with spades. However, Russell quite liked his club holding and passed, ending the auction. The defence cashed two spades and played a trump, after which John did very well to hold his losses to down 3 when the defence ended up having to open up the diamond suit at trick 12. The sting in the tail was that in addition to the 500-point penalty, Russell had honours in trumps for another 100 points! Scores were now completely level.

Fiona and John recovered to take out the 4th rubber in just two more hands, giving them a useful lead of 930 with 7 boards left. Anthony and Russell bid and made a couple of skinny games to level the match again after 27 boards, On the 29th board Anthony and Russell bid and made 3NT. At this point they were behind by 80 points on the scorecard but their one game up would be worth 300 points if we reached the end of the match without any more games being scored.

Thus, Fiona and John had to either make a part-score with honours, or bid and make a game themselves. In their semi-final, they were 60 points in front going into the final board. Here, they had a little catch-up to do. This was the final board:

Fiona and John wasted no time getting to 3NT, and Russell led the

4, taken by the Jack. Now Fiona needs the club suit to come in for 5 tricks so that meant Jxx onside. The jack was onside but the suit was 4-2. Fiona had no way back to her hand to enjoy the last two clubs (Russell continued hearts each time when he was in with a club trick) and a valiant effort finished down 3. The final margin was 370 to Anthony and Russell. 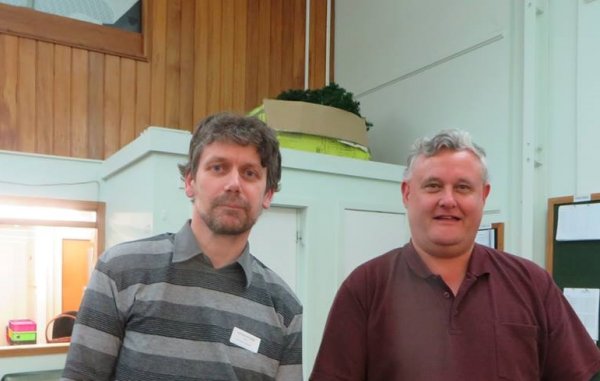 So, who had the best cards? It was pretty even with our side holding 582 points to their 618. I averaged a modest 9.2 points per hand while Russell had 10.2.” Most significantly, he held 16 on the last deal and the oh so important

9 which was the card that sent the trophy to Wellington.

Congratulations to both pairs on an extremely well fought final and to Anthony and Russell on their victory, which earns the winners $500 each and the runners-up $ 250 each.

The event is sponsored by the New Zealand Bridge Foundation through the very significant bequest it received in the early 1980’s from an avid Auckland Rubber Bridge player, Dan Gifford. While Rubber Bridge can be really frustrating when one’s opponents reel off a series of unbeatable games and slams, it really is a very exciting form of the game as demonstrated in the final this year. Played generally across the table with two packs of cards, it is also a very social form of the game.

Russell commented that they have already entered the 2022 competition and that they had very poor cards in the first round. No worries, though, as they received a bye in that round!

So, with some reference to “The Chase”, if you think you are lucky enough to pick up lots of good cards (oh, a piece of good play every so often helps), I hope you have entered the 2022 competition.