Taking Full Advantage. ..of an opponent’s

How do you feel when the opponents double you for penalties? A little nervous perhaps. Bad trump break? Certainly no “walk in the park”. Then they lead and suddenly the news cannot be that bad. The lead is favourable. So, make sure you take full advantage.

The bidding was curious in that North might have bid 4

was less than an opener with 5 hearts and 4+ of a minor. Maybe North was unsure of what to do over an expected 4

bid. If South held clubs, then bidding to 5

might be a good idea but less attractive if South held diamonds.

showing a maximum opener with diamonds. 4

never came but both doubles were for penalties.

A and switched to

It’s curious, that opening lead and continuation. Surely, despite the double of 3

, West is not looking at

AK or else why lead an unsupported ace? Also, it would seem unlikely, though possible, that West is looking at

Q. So, with no more than 5 hcp in spades or diamonds, the location of

Q is likely with West. Again, no guarantees…and there is no need to finesse at trick 2, because if it fails, you will surely see two rounds of spades played very quickly….and your contract will be one down.

A at trick 2. What’s your plan? Ruff a couple of diamonds in dummy, draw trumps and claim. Maybe…but why did East double? Not on the evidence so far. So, declarer played a trump to hand to ruff a diamond…..and West discarded a spade on the first round of trumps:

So, East thought their trumps would be a nuisance...and they were right!

Declarer ruffed a diamond, played a second trump to hand and ruffed a second diamond…. but with no trumps left in dummy, declarer could not get back to hand without suffering a club ruff…down one!

Yes, South would have succeeded had they taken a first-round club finesse, drawing trumps and repeating the club finesse to discard two diamonds on

AK. However, there was no need to risk the club finesse at trick 2, as long as South took a small precaution. When they played

A, they had to play

J under the ace!

Now, a heart to hand, ruff a diamond high in dummy, and return to hand in trumps with the marked finesse of the

9. Draw trumps and now play a club to the 10. Because of the trump and club breaks, this club play is necessary to make your contract. You would feel very happy if the

Q had dropped singleton but throwing the jack under the ace is a play to make, just in case. 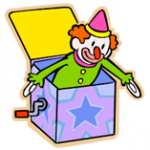 Jack in the box and thrown from hand!

Of course, without that

has no chance of success. If West leads a club (surely more normal), South has to give up a diamond early and must suffer a club ruff. Spade lead and club switch from East, an obvious singleton, will achieve the same result.

That was not the issue here.  East-West had done well in the bidding as 4

cannot quite make despite the favourable trump position but West did not do so well in their choice of opening lead. Hopefully, you took full advantage to make your doubled game. So, nothing to fear in a doubled contract. Not that you should relax and work out the score before you have ensured the contract’s success.

Everyone has had their say. So, what now?  (Teams)