That’s the message from today’s deal. Here, then, is your opening lead problem. Maybe it is not a problem?

A straightforward natural sequence with a negative double from North and South going straight to game. It’s your lead.

Sometimes when you lead, it is entirely speculative: on other occasions, you might have a plan. Maybe this deal falls into the second category. You should manage one club trick on all but a very bad day and can surely count on the

A too. Perhaps you might count on two tricks in clubs if partner started with only three clubs. Is it up to partner to provide the much needed fourth defensive trick?

Maybe they can but you can see one additional chance without relying too much on partner?

Most South players made 10 tricks in spades whether or not they were in game. However, at one table, West, John Driscoll, led his singleton

A. His wife and partner, Rona, had supported clubs. So, John crossed his fingers and led a low club at trick 2…and Rona won with her

Q. No need to think too much once she had got over the surprise of winning this club trick. Back came a heart.

Since Rona had played

J, John knew not to try for a second ruff and cashed his

A for the fourth trick for the defence. Simple and effective.

The under-lead was dangerous but had an above-average chance of success considering the club raise. Had Rona held

A instead of her two queens, a surprised South would have won trick 2. The only improvement on John’s defence might be playing

Q. Yet, in such a situation, for many the lead of the king asks partner how many clubs they hold rather than the quality. Also, in a Pairs environment, merely holding 4

to 10 tricks would be great where South only had one club.

So, the breath-holding underlead was worth the risk and within a few seconds, the defence had four tricks and a very good result. 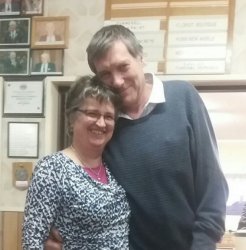 Rona is currently providing on-line bridge lessons on Real Bridge based on the New Zealand Bridge notes and play hands. She has already taken one series for Beginners(a second is planned for late July/ August) and has just started a series for Improvers.

These are on Tuesday evenings (7-9pm) and repeated Wednesday afternoons (2-4pm). The first was on Stayman. Next week, she covers Transfers. Maybe you know keen newish players who would like to improve their knowledge. Follow this link to see the schedule of lessons and register  Online Lessons and Improver Classes (nzbridge.co.nz)

Tomorrow, it’s another deal for new players as it’s “Fri