Many words have and will continue to be written and spoken about this event being transferred late in the day to on-line. Whatever one feels about that decision, it was great having 98 pairs participate.

We are going to salute the successful pairs….and discuss this deal below:

Congratulations to the following prize-winners:

The end result was in doubt until virtually the last card was played. One of the last matches to finish was that between Pam Livingston- Jan Alabaster and Lynda Rigler- Peter Delahunty, who had an extremely good tournament. Pam and Jan picked up 9 imps over the last three boards to win a tight match by 3 imps and just enough vps to squeeze past Jeff Miller and Graeme Stout. A very consistent performance from the winners who lost three matches, the largest loss being by only 4.65 imps. 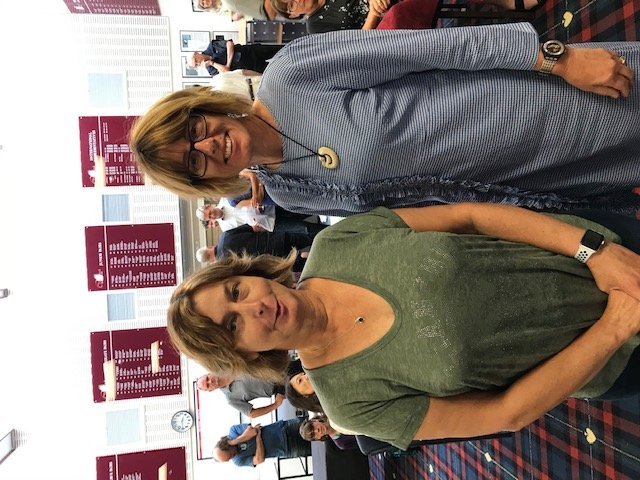 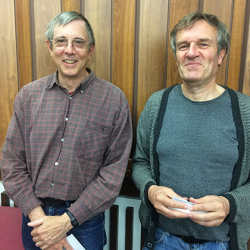 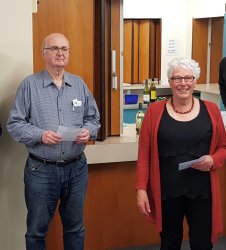 So, back then to our problem….and problem it must be as less than one third of the East-West pairs made it to the coldest, lay-down small slam possible. The two hands had only 26 hcp between them and 25 of them were necessary for the contract to be so cold. The East-West hands could have come out of a text-book on splinter bids.

Some East players used a Jacoby 2NT (game-force, spade support) in response to West’s opening. However, when West jumped to game with a minimum hand and no shortage, they declared. Others simply bid 2

rebid. The East hand has too much potential for a delayed game raise.

This is a deal where East has to show rather than ask their partner more about their hand. A double jump (4

) should be a singleton or void with 4 card spade support and is traditionally in the 10-13 hcp range. Yes, it is a jack too strong but was probably a more useful and certainly a more successful approach.

With minimum values, but most importantly, nothing wasted in clubs, West should make one try for slam, with a 4

cue-bid. One try was all East would need as Roman Key-Card did the rest. While East could not be sure about the

Q or indeed whether West had three small diamonds, with West surely having some length in clubs, they had to be shortish in one of the red suits: well worth the slight risk of a second loser along with one of the black aces.

A few North-South pairs bid aggressively in clubs, right up to the 5-level! While trumps were not a problem, every other suit was. Both North and South hands were essentially flat, making such aggressive bidding risky. Had any East-West decided to punish 5

, they would not have had to worry about missing slam, -6 or 1700 for the defenders. Alas for East-West, no pair took their opportunity. Pre-emption lives on, as the interference seemed to talk the opponents out of bidding slam. A warning there when you do bid aggressively. Do not just look at your trumps.

Finally, thanks to all those involved in running the event, the directors and scorer, Allan Joseph, Caroline Wiggins and Kevin Walker, and to Evelyn Muncaster who ably oversaw the change from live to on-line event on behalf of the Nelson Club.

A defensive problem from the weekend will be featured tomorrow.