“High” says the book when your partner leads a low card.

“Just have a look before your follow the book.

Have a look….3NT played 6 times and made 5 times it made.

You are sitting North and your partner leads the

5 (4th highest leads) and after a moment’s thought, the declarer calls for the 3 from dummy. During that second or two’s pause, were you thinking too? It’s often a good idea for the defender to use that time as well.

You could check on the lead using the rule of 11. Take the card led (the 5) from 11 and the answer is 6 cards higher than the 5 in West, North and East’s hand. You can see 4 of them. No great clue, there. If declarer holds the

J, you do not want the ace to be played “on thin air” ie without drawing one of those cards from declarer. However, there is a reasonable chance you partner has one of the missing honours. 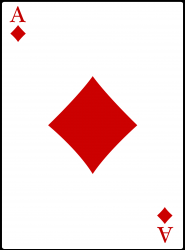 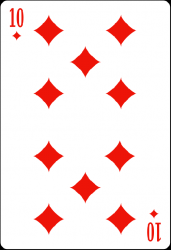 If it is the queen in the South hand, it does not matter if you play the ace or the 10. Declarer will only win one trick in the suit either way. Say partner led from the jack? Now, if you play the ace, East will take two diamond tricks unless they hold a doubleton diamond. You must insert

T and the contract is doomed. Play the ace and the contract is cold. You still have a little work to do, though, as declarer plays off four rounds of clubs. You need to get your partner to continue playing diamonds when they gain the lead. If you play suit preference discards, your first discard should be the

4 asking for the lower of the other two suits. If your discards are of an encourage/discourage nature, then throw a discouraging card in each major. East needs two spade tricks but South wins the ace and after a wait which seems like eternity continues diamonds to beat the contract.

Should East have played

K from dummy at trick 1? Assuming that South has a 5 card suit, then this is the correct play if North held both the

A since East would duck the first two rounds of diamonds. Similarly, the contract would be cold if South held both aces. East could have ducked the

10 at trick 1 though because of the lie of the two aces, there was no way this time to 9 tricks. In fact, East needed misdefence and 5 times out of 6 received it.

“ Wrong defence  and wrong play. Yet the contract’s not light.