This article is more about the bidding than the play. The more bridge you play the more kinds of uses of double you find. Initially, it is just the take-out double, the penalty double and maybe the negative double. That’s three and is surely enough to try and grasp.

If you can, it is worth trying to grasp a fourth kind, the Reopening Double, named because if you fail to take immediate action, the bidding will die and often not to your advantage. Take a look at this recent deal:

West’s bid is pre-emptive, designed to make it difficult for one's opponents. It did just that because everyone passed. As you can see, there are 11 fairly easy tricks to be made in diamonds but West went quietly one down in 3

for a very good East-West score.

So, who should have bid, North or South? Although North does hold four card diamond support and two aces, they do not really have enough to bid freely at the four level. So, the pendulum switches to South. South does have a good hand and should not give up, just because of North’s pass. South could bid 3

, giving their partner the option of two suits. However, South can do better. “Double”, a reopening double, saying they want to compete further, and probably has four cards in an unbid major. Many good things could happen. North-South could find a fit in spades or diamonds and if North felt like it bid on to game or if North had a trick or two in hearts, they could pass the double for penalties.

A reopening double, primarily to get your partner to bid, can always be passed for penalties, at the partner’s discretion.

When South doubles above, North could consider they have quite a good hand for someone who has not yet made a bid. They could jump all the way to 5

. They would anticipate, hope, that their partner is short in the opponent’s suit, one of the normal requirements of a reopening double.

So, North could bid 5

. In a diamond contract, West will lead two top hearts with South ruffing the second round. Declarer will draw trumps and take both the club and the spade finesse. South needs one of the finesses to work to make game. We should be optimistic and try to be in game if it requires one out of two finesses. Ironically, if both finesses failed, 3

Remember the re-opening double, if the auction is about to die, you are shortish in the opponent’s suit and have a reasonable hand. A useful double number 4 to put in your memory bank. 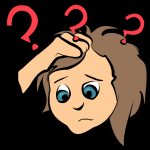