and we will all wind down for a week or two..or less. "Bridgeless Days".

how to enjoy themselves. Let's destroy that myth! The following is a selection of some bridge

players who were certainly entering into the spirit.

If you would like to send a picture or two (not 22) of players at your club enjoying themselves, then we

will try and find a small corner to show everyone else. So, let the pictures take centre stage:

Hooting  and Tooting at Tauranga

We start in Tauranga, the home of bridge players who know how to enjoy themselves. Up above, we have a room bursting at the seams with happy bridge players. The theme of the day was the letter N and the committee did a nuclear theme to celebrate 30 years nuclear free NZ. Hence the colours in the decorations. There were a record 151 for breakfast and another record of 39 tables for Bridge in the afternoon.
So full was the room that we see one table having to play without chairs...perhaps the name of the game was to play for "under tricks". " Quite a hoot" was how one of the organisers, Karen Martelletti, described it.

Tables were asked to take to the streets from time to time to see who could get the most toots. Well in the running were Judy Walvogel, Lynne Smythe, Janice Simpson and Heather Melville (featured above). In case you are wondering, it is never windy in Tauranga, honestly!

About 3 weeks' early, to be exact but from the following, it does look like he had some nice goodies to give out: 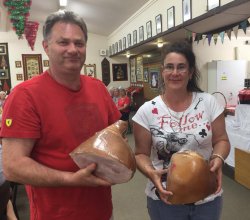 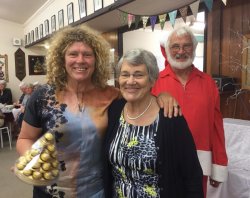 It does seem that the places to visit are the homes of Blair and Liz Fisher and Jo and Sam Simpson as they left the tournament with champagne and ham. (hint: do not play bridge with your wife and you can win a selection. That's Jo playing with Blair and Sam with Liz.) Anna Kalma did keep it in the family as she played with her mother Hermanna. Surely Anna is not planning on keeping all the chocolates she won all for herself?

So, good on you, Santa. 72 pairs enjoyed the day and the top pair at the table were Karen Harris and Ian Clayton. I am sure all 144 players enjoyed themselves.

That was the theme at Akarana's Christmas Pairs. It was a sweltering hot day, well suited to some skimpy clothing. A sun umbrella could have doubled for another use during the afternoon hail but otherwise, it was sun and smiles:

Three distinctive beachwear styles as modelled by Carol De Luca, Douglas Russell (fresh from a day at Brighton or Torquay or Skegness) and a very colourful Stanley Abrahams. The pair that kept their mind on the job were the bridge winners, Pam Canning and Duncan Badley.