Greetings from the Winterless North once again. No more frosts as yet this year but it sure has rained and the thunder and lightening storms have been nothing short of amazing.

Not a lot has been happening here over the past few months. We Northlanders tend to go into hibernation over the Winter season. However, there have been one or two occasions worth a mention.

August 10th saw the Northland Centre Teams battle it out for supremacy. One team of Open, One Intermediate Team and one Junior team from each Northland club battled it out on the day. However there can be only one winner and this year it was Whangarei with a clean sweep in all sections. 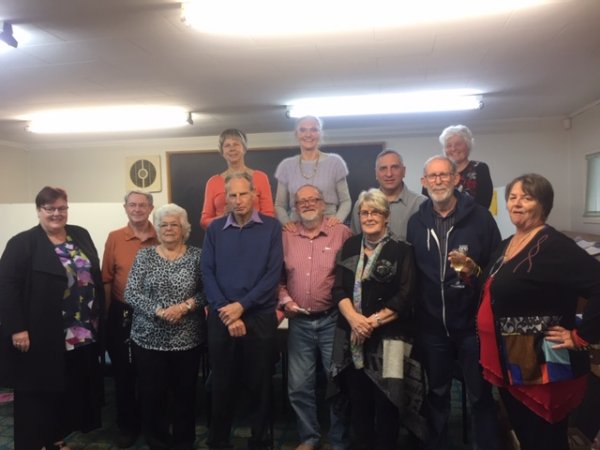 Paihia 8B Open and Intermediate /Junior 5B.

Next we travelled to Paihia for where the view from the Bridge table is so distracting its amazing that any cards get played. You have to hope for a rainy day when you play at the Yacht Club and the Paihia Club sure know how to put on a tournament. Full credit to Heather Cernis for her and her team's hard work while the donated raffle prizes were amazing. There was something for everyone with Boutique accomodation in Russell being first prize.

The Open winners were myself and Neil Ruddell (Yay us).  However, there were two second placegetters with exactly the same score. Margaret Hooson and Richard Bland along with Kevin Grundy and Laura Maton both averaged 57.59% to share second place. Margaret and Richard got exactly the same score in the afternoon as Kevin and Laura did in the morning and vice versa. I bet that does not happen very often.

(along with Paihia representative Roger Topliss)

In the Intermediate / Junior section it was a very close run race with 3rd Maureen Russ and Diane Russell with 56.60% , 2nd Teri Ann Scorer and Alan Walpole with 56.71% with the winners being Kevin Brown and Sue Parker with 57.52%. Top Juniors were Lee Orton and Lewis Hart who came a very credible 6th overall.

August 25th was the Whangarei Bridge Club AGM.  I would like to say a huge THANK YOU on behalf of all club members for the hard work the committee members do, often for little or no thanks. You are very much appreciated and we thank and applaud you for putting your hand up.

Last week we had the Craigs Investment Partners Pairs in Whangarei. A squally nasty day so a great way to spend it. Nice to see some new faces in the winners section as well.

Congratulations to Bob and Sue Brown who took this one out winning both sessions their way with an average of 59.01% . 2nd were Lenna McCahon and Julie Harper with 56.09% and 3rd Margaret Hooson and Richard Bland with 56.01%. Again very close between 2nd and 3rd.

One, Two, Three in Whangarei

National Congress in Prose and Poetry

A few of us who are suckers for punishment are gearing up for Congress and looking forward to seeing the old faces and hopefully a lot of new. If you havent been before, give it a try. It's loads of fun and you get to meet some really neat like minded  people.

I’ll leave you with this:

Bring on The Congress

Just two weeks till Congress and all in a flap

My partner's gone rogue and my bridge has been crap

Havn't been able to make a contract if I tried

Came home last week and I just cried and I cried.

The double came in but I thought I was right

With 27 points what could go wrong

And what do you know, the split was the worst

I muttered and muttered, swore and then cursed

And just like that I was down by heaps

So can't wait till Congress, see you in two weeks.

and good luck to Northland's favourite son, Matt Brown, as he and the rest of the New Zealand teams take on the world's best in China next week.