2019 and all that. Sunday answers and more questions.

You should be getting into the routine by now...5 questions per day and first of all
the answers from the previous day. 10 marks maximum per question with some bonus
marks thrown in.

So, let's look at the answers to yesterday's questions. 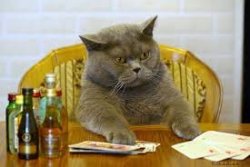 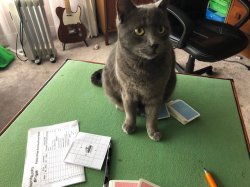 Poetic licence allows us to name Biritch, the sometimes friend of our Auckland Regional Correspondent, Douglas Russell. Readers of Douglas' columns will certainly draw the conclusion that Biritch would make a very suitable bridge partner should you ever be in need.
So, too, it seems would be other other feline who lives with Anna Kalma, our Waikato Bays Regional Correspondent. Anna reported during the year a National Rubber Bridge match at her house where she and her partner/mother had built up a very handy lead but then when the cat whose name is Ash was banished to the kitchen, the luck changing dramatically causing Anna and Hermanna to be beaten. I am not sure how much of the good fortune was attributable to Ash but something caused the good cards to change..and who can challenge the suggestion that a curse was placed for failure to "stroke or reward" the feline.

Anyway..5 marks each for naming Douglas and Anna as the owners.

Anyone for Rubber?                                   A toast to Sunday
2. We follow on the theme from the first question as the four Wellington area players are involved in a game of Rubber Bridge, the local qualifying heat of the nationwide competition. A full 10 marks for saying Rubber Bridge, a bonus one if you named the National competition and a bonus 3 if you promise (and our checkers will monitor that you kept this promise) to take part in your region's heat in 2020. (all right..1 very generous point if you just said they were playing bridge!)
and why not take part next year? About 120 pairs nationwide take part in this event. Qualifying matches are generally played in one pair's home in a friendly but competitive atmosphere. No awkward systems to contend with as it is Junior level only and a neat way to spend an evening. Look out for notices advertising this event and do take part. The lucky 8 pairs go through to the national final in Hamilton with $1,000 to the winners.

3. Auckland and New Zealand's oldest bridge player, Sunday Millar, passed away this year at the age of 103. She was driving herself to bridge and scoring extremely well right until her passing. Here she shares a drink with former Auckland Club President, Murray Weatherston.
So, 5 marks for naming Sunday Millar (OK... we'll be generous and award them for just her first name) and 5 more for 103. Apt to have the question on a "Sunday".

4. 5 marks for naming Stephen Lester and 5 more for saying he was the Bulletin Editor at this year's NZ National Bridge Congress. We hope that you all enjoyed reading Stephen's excellent Bulletins as the chances are very strong that Stephen will be back in Hamilton to do the job again in 2020.

We hope you all got this one right as we all celebrated the New Zealand Open team finishing with the silver medal in the APBF Championships in Singapore in June. The team (with Martin Reid replacing Derek Evennett as npc) went on to finish a very creditable and oh so close to qualifying 9th in the Bermuda Bowl later in the year. Both events were plagued with some "if onlys" relating to slowish starts but the team performed extremely well in both events.
So, 10 marks for the silver medal in Singapore or at the Asia Pacific Bridge Championships.
We are sure the team needs no introduction but for the record we have Derek, Michael Ware, Matthew Brown, Michael Whibley, GeO Tislevoll and taking it easy in the front, Michael Cornell and Ashley Bach.

1. Two words connect these two pictures (below, left and middle). What or "who" are they? (the hand with the dog may give you a clue...but there again, it may not! Also, we do not believe that the hands in the 2 pictures are those of the same person.)

2. The above (right) picture is of Christchurch's Sarah Garland and Pavla Fenwick. What prize did Sarah win
at this year's National Open Teams?

3. What did these two gentlemen (above) achieve in 2019 along with three other male and one female bridge player? Can you name the other 4?

4. Whose picture is below (left) and what role does he have with New Zealand Bridge?

5. Which 3 bridge players are cutting a 50th Anniversary Cake in mid 2019? Which club is celebrating being "50 years young" ?

answers tomorrow before the old year has gone.