First up the Gold Coast Congress and the New Zealand teams not only whopped butt in the Teams but again the dress up.    NZ (and more specifically the Te Aroha club) has set the standard for several years and this year's theme of Fauna and Feathers drew some stiff competition but not serious enough to topple the Te Aroha team of Victor Kooter, Laurie Belfield, Judith Howard and Peter Daffurn who impressed with their kiwiana theme of cows and wahine and wowed the judges with their set of udders to take home the acolades.

I caught a bunch of youngsters (plus Liz’s dad Dougal) playing bananagram at Tauranga Congress.   It looked serious … until I zoomed in on the bananagrams of one of the participants … not sure if he had quite worked out the subtleties of the game! 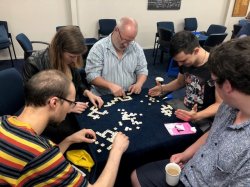 As the long hot drought dragged on in the Waikato, Cambridge decided to hold their bridge in the garden at Sue Aiken's. Don’t know how they managed it but Waikato Farmers are forever grateful to them for the rain they received that day.

"Garden" Bridge in the wet Waikato

The Thames Festival kicked off the region's flurry of teams events early in the New Year.     Thames were trying a new venue just out of town which though smaller had the benefit of not having bus passengers gate crashing the events of the past, better access to parking and beautiful sunsets in the evening over the firth of Thames.    And the same generous hospitality was evident from the Thames club.

The John Eldridge teams was taken out with a clean sweep by the Fisher team of Grant Jarvis, Pam Livingston, Blair Fisher and Liz Fisher who had a 11VP buffer from second place Solomon team consisting of Richard Solomon, Linda Cartner, Denis Humphries and David Dolbel.

Rotorua hosted the Kelly Pierse Teams event which drew more teams than they had seen for many years:  All up 30 teams competed for the title.

The Smith team [Malcolm Smith, Evelyn Hurley, Kathy Yule and Karen Harris] came up tops albeit they had a less than comfortable margin of just 1VP over the Simpson Team [Jo and Sam Simpson, Fuxia Wen and Ian Berrington] and in fact it was thought they would have to undertake a playoff board to separate them until a error was found in the score up.

A week earlier Tauranga also was filled to capacity at their Congress during Anniversary weekend.   On the Saturday, 18 pairs competed in the Restricted Open Event which was open to anybody with a ranking of less than a life master.    Diane Rodger and Lyn Bailie from Mt Maunganui and Tauranga won this event and there was feedback from many that they appreciated the opportunity for an alternative rather than compete in the three session 10A Provincial Pairs.

The main Provincial Pairs event was won by Charles Ker and Alister Stuck from the Central Districts in a relatively low scoring event with an average of 57%.

Another huge field on the Sunday saw 36 teams take part in the Waikato Bays Regional Teams event.    The top 8 competed in a final and plate on the Monday while the remainder battled it out in the consolation field which was won by locals Marion Kelly and Norm Silcock (Jo and Sam Simpson runners up).

The Teams was won by overseas visitor Debbie Hyatt playing with Owen Camp and Pamela Nisbet and Anisia Shami from the South Islanders John and Jane Skipper with Alan Grant (almost a South Islander!) and Jane Lennon.

Hamilton hosted a combined Junior, Intermediate and Novice event with 54 pairs taking part attending from all across the region – although it was all Hamilton in the victory circle.    Congratulations to Graeme Hope and Trini Lin (Hamilton) who took out the Intermediate with 127.7% combined.    Junior Pairs was won by locals Vaughan Samuelson and Francoise Campbell with Judy Cooper and Rachelle Meijer also from Hamilton club winning the one session Novice.

9865  …  What symmetry – alas if I was only playing gin rummy. … purely a spectator hand with the only difficulty was working out how not to encourage any suit with discards.   A lot more fun sitting East West with this one.

I have it on top authority that North bid her hand perfectly.