Day One at the Inter-Provincials

Central Districts are the early leaders in the chase for the Dougal Mclean Trophy at this year’s Inter-Provincial Championships. After 5 of the 7 rounds in the first round-robin (each team has one bye), they lead both the Senior and Women’s events and are running a competitive third in the Open event. Auckland-Northland have a strong grip already on the Open event while Wellington lead the Intermediates. These are the overnight Dougal McLean standings:

In the Open event, the top two are unbeaten with Auckland-Northland 19 vps ahead of Wellington though the leaders are still to have their bye (10 vps awarded for the bye) and the top two are yet to play each other.

The Seniors is much closer with Central Districts having a 6 vp lead ahead but only 8 vps ahead of 4th. It is not sometimes the number of wins you have but the size of them as 2nd placed Top of the South having just one win in four matches while 5th placed Auckland-Northland have had three from five matches.

If on paper, the Women’s event looked like a battle between Waikato Bays and Auckland Northland (with 3 Women’s international pairs in the two teams), the all Taranaki Central Districts team have made a mockery of such a statement leading currently by 3 vps from Waikato Bays, who hammered Auckland-Northland in the first round.

Wellington have dominated the Intermediate event in recent years and carried on the same way from the start this year with three huge victories in their first four matches to lead Auckland-Northland by just over 8 vps.

A lead to ponder on

You have not got much…so what’s to be done?

We will return to this shortly. 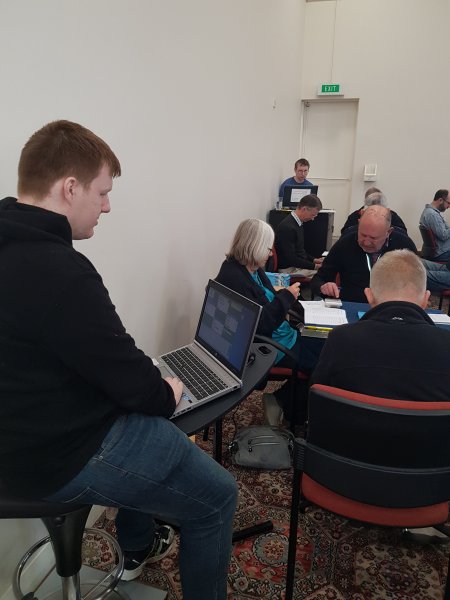 BBO coverage of the competition...and one of our top players in an
unfamiliar position. That's Matt Brown recording the play.

Our Women were particularly shy when it came to bidding what would seem to be a very straightforward grand-slam in the second match of the day:

or, for the less adventurous, a more sedate 3

K, then East can count 13 tricks opposite a 3

opener. For those playing key-card, 4NT will allay fears about the

K. For others? Well, even if you cannot be 100% sure of which king partner holds when you ask for kings, it must be a reasonable assumption that it is the

K. Go on. Be brave…and after this board adopt Key Card responses!

Yet, the Women’s field produced a row of 6

contracts with only 10 out of 24 East-West pairs bidding to grand in the four competitions. Congratulations then to the following Intermediate pairs who managed to bid to grand-slam: Simon Louisson- Jeremy Morley (Wellington), Yvonne and Ron Janes (Central Districts) and Stuart Grant – Tony Quinlivan (Canterbury). Stuart and Tony would like to hold those hands again when they play in the final of the National Rubber Bridge event next Thursday.

You may say that the opening lead is pretty important. So too can the play to trick 2 be!

Well, there were two suits which helped the defence and two which did not! There was the conservative "lead partner’s suit" approach which was fine or trying the unbid major which was “finer”! Actually, the “finest” of all was if you had got to bid that unbid major!

10. With declarer known to hold at least 15hcp for their 1NT overcall, the West players could account for at least 37 hcp between declarer, dummy and their own hand.

Hearts would seem to be a hopeless continuation. So, in hope, desperation, they, including Waikato Bays’ Kate Terry, tried a high spade and their partner provided a very suitable holding.

conceding just three minor suit tricks to gain 10 imps in a match they lost by 15 to Wellington.

Some action from Day 2 tomorrow morning. Meanwhile, check out the BBO schedule of matches and watch live. Click here.