As told by John Wignall 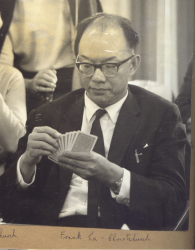 Frank Lu was born in Shanghai and attended the University of St John in Shanghai where he obtained engineering qualifications. He came to NZ with a Chinese group looking at Ministry of Works’ development of dams on the Waikato River. He liked it here and managed to manoeuvre himself a job with Ministry of Works and then later at University of Canterbury as lecturer in civil engineering. During his time on the university staff he went on sabbatical to Berkley, California and researched Critical Path Analysis which was an innovative management technique of the time. Frank wrote a book about his knowledge and experiences with the technique. In due course the University of Otago set up a Chair of Business Management and Frank was appointed in 1971. He moved to Dunedin and started playing with Paul Hudson. Then the University of Canterbury set up the Sir James Fletcher Chair of Business Management and Frank returned to Canterbury University from 1973 until he died in 1984. When Joe Ward died Frank took his place on the NZCBA Management committee, eventually becoming its chair. He was always one of nice guys who would solve problems by appeasement and conciliation rather than confrontation.

His partnership with John Wignall was one of the most successful on record in New Zealand. Together they won the New Zealand Pairs five times, the New Zealand Teams once and the Interprovincials three times. They also represented New Zealand at international events on six occasions. However John talks about the difficulties he had trying to get Frank to use conventions. The very earliest of these was Stayman – Frank would open 1NT (acol) and pass John’s response of 2§. Then the auction would go (Frank) 1NT: (X) : (John) 2§ and Frank would reckon he knew that bid to be Stayman and respond appropriately. Another difficult sequence was (1ª): 2©: (Frank) :(X) (known to be for penalties) : (XX)  (John), followed by a pass from Frank. After some discussion, the same auction occurred three days later with the same response. In both cases the penalties were horrendous. Of course, later he learned Symmetric Relay and played it with great success with Kris Wooles.


He died suddenly of an aortic aneurism – it was close on Christmas and the family was scattered over the world so had difficulty getting to Christchurch to support his widow and organise the funeral which wasn’t held until a fortnight later. Two prizes are offered at the university in his memory for students with an engineering background who are studying business management.