Imagine you’re an Australian (no this isn’t really a nightmare) who’s been playing Bridge for more than thirty years. For most of those years you’ve trotted off to the New Zealand National Congress – the early days in Rotorua and latterly in Hamilton. You’ve made many Kiwi friends in the process, you’ve competed in many finals and won nearly 800 A points during those visits and, by the way, have taken out the New Zealand Teams title twice (in 2002 and 2009) and the Congress Swiss Pairs in 2011. You remember the days when NZ A points were hard to come by (and more recently when they seem to accumulate more readily).

So Jimmy Wallis is cleaning out his ancient filing cabinet and out flutters a stack of pink and green pieces of paper. Many of today’s Bridge players would not recognise these as the early form of master points and would likely have thrown them away. However Jimmy recognised them as pure treasure, had his sister laminate them and brought them to New Zealand. Alister Stuck agreed (perhaps even insisted) that he would credit them to Jimmy’s master point record. They have been scanned and you can see them below. 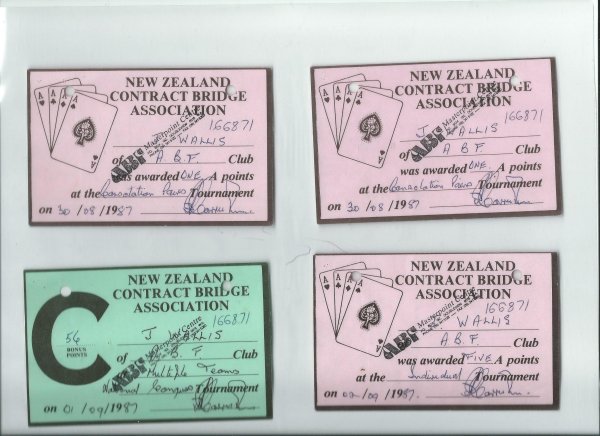 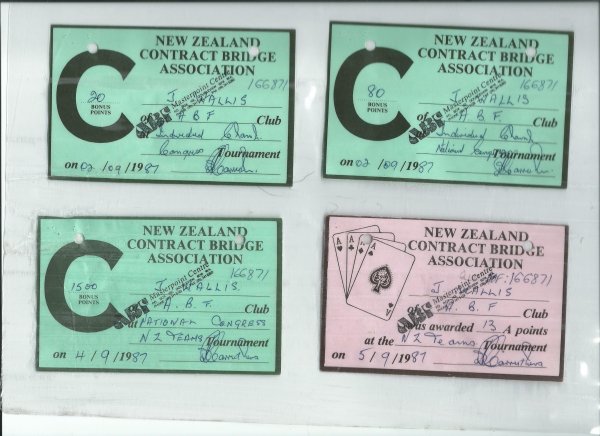 Those readers who have been around for a while will recognise the certificates as the precursor to the digital means we use now to record master points. Notice that they were awarded in 1987 – just the second year of the NZ National Congress. Notice also that they are signed by Mavis Carruthers the wonderful woman who, with her husband Alan, ran the front desk for many years.

Thank you Jimmy not only for your loyal support of the New Zealand National Congress but also for saving the little bits of paper that are a part of New Zealand Bridge history.